Aren’t Yajnas a Waste of Money?

Question: Aren’t yajnas (fire sacrifices) in which grains and ghee is poured into fire to be reduced to ashes a foolish waste of money?

Answer: They will appear to be a waste only as long as we are uninformed.

The Vedic texts that talk about yajnas assert that, just as while living in a country the citizens are duty-bound to pay taxes for the utilities provided by the national government, similarly, while living in the universe, we are expected to pay cosmic taxes for the utilities provided through nature by the cosmic government headed by God. The utilities of food, water, air, lumber, rocks, metals, jewels, oil and so forth lead to a staggering “bill to nature” for $16 trillion to $54 trillion US dollars per annum, as described in Nature, 15 May, 1997. 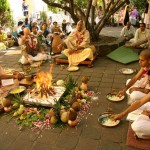 The medium of economic exchange is known to vary greatly in accordance with the prevailing socio-cultural setting. For example, if an ancient from the Vedic age is transported through time into our society, he will be aghast to see the amount of value we ascribe to the pieces of paper that we call currency notes. Just as our medium of exchange – currency notes – is unintelligible to an ancient, the Vedic medium of intra-universal exchange – sanctified fire and sound – is incomprehensible to us. An intelligent person focuses not on the medium of exchange, but the principle. We moderns give valuable things – our time and energy – to get money, and we get important things – the necessities of life – by giving money. Similarly, Vedic followers offer oblations into the sacred fire to satisfy the Cosmic Controller and in return receive profusely all the gifts of nature.

The proof of the pudding is in the eating; the proof of the authenticity of the yajnas is in the resulting prosperity. The prosperity of ancient India is well-known, as described both in the Vedic literatures themselves such as the Shrimad Bhagavatam as well as by many historians including A L Basham in his The Wonder That Was India. Indeed, the present world’s most prosperous nation, USA, was discovered when explorers were searching for new navigational routes to tap the prosperity of India! The principle of cosmic governance is also negatively evident through the present erratic supply of natural resources due to our non-remittance of our cosmic tax.

Of course, in the present age, yajnas are not practical due to the prohibitive costs of the required oblations as well as due to non-availability of competent priests to precisely chant the intricate mantras. Therefore, the Vedic texts recommend a method more pragmatic than fire sacrifices: sonic technology activated through mantra chanting. But the principle remains the same: harmonization with the cosmic state for sustainable prosperity. Applying this principle is by no means a waste of money; rather neglect of this principle will reduce our earth to a wasteland, as is increasingly happening nowadays.

You might also like
mantramoneyArticles
MORE
Why waste time in uttering a mantra repeatedly?
2 Comments
Leave a response