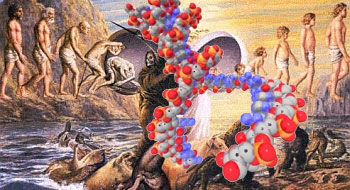 Answer: No, they don’t. The reincarnation theory doesn’t claim to contradict or substitute genetics; it supplements genetics and explains many observations that genetics leaves unanswered.

Genetics holds that we inherit our characteristics from our parents. While the observation of parent-offspring physical resemblances may confirm genetics, many other observations question the completeness of genetic explanations. Here are a few of them:

The Bhagavad-gita (15.8) explains that the souls who transmigrate from one body to the next carry with them their conceptions of life, which can be correlated with the mental and moral characteristics. When children are born from parents, their physical bodies come from their parents and so they resemble their parents’ physically, whereas their mental and moral characteristics come from their own past lives and so these characteristics differ from their parents’. Applying the Gita understanding to geniuses, those souls who have in earlier lives cultivated the self-conceptions of being artists carry to their next bodies that conception along with its associated talents – and so appear precociously talented.

Thus, the reincarnation theory doesn’t contradict genetics, but supplements it by explaining much that genetics can’t explain.

You might also like
ReincarnationSoulArticlesScience - Modern
MORE
Reincarnation – From Romance to Research
Why are some people born wealthy and some poor?
As we don’t remember our past lives, how do we learn anything from them?
Is there any proof of reincarnation?
Why discuss unscientific things like God, soul and rebirth in this scientific age?
15 Comments
Leave a response