Can we be spiritual but not religious?

These two terms “spiritual” and “religious” have so many connotations that without specifying their meaning, we can’t have any productive discussion. Let’s focus on what these words normally connote in the ‘spiritual-not-religious’ usage: ‘spiritual’ usually refers to the experience of the higher, deeper aspects of life, whereas ‘religious’ refers to the adherence to certain beliefs and rituals given in a specific tradition. The implication is that spiritualists are open-minded because they are open to higher experience, whatever be the way they get that experience. But religionists are close-minded because they stick only to the way given in their own religion and deride or dismiss the ways given in other religions. 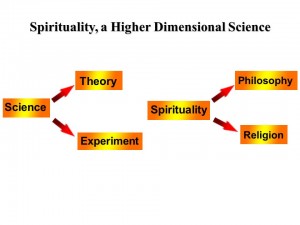 The Vedic wisdom-tradition points to an intriguing relationship between spirituality and religion. It explains that spirituality is meant to help us develop love for God. This is done through a harmonious combination of philosophy and religion, which constitute the two rails on which spirituality runs. The philosophy aspect of spirituality involves the study and understanding of matter, spirit and the controller of both, God. And the religion aspect involves the following of certain rules and regulations that help us realize and experience higher spiritual truths.

These two aspects of spirituality are strikingly similar to the two aspects of modern science: the theoretical and the experimental. Science’s theoretical aspect involves formulating hypotheses to explain the observable phenomena within the universe; it is similar to the philosophy aspect of spirituality. Science’s experimental aspect involves the following of certain rules for regulating the laboratory environment so as to verify the hypotheses; it is similar to the religion aspect of spirituality. Thus, spirituality can be considered to be a higher-dimensional science – higher-dimensional because it deals with a reality higher than that dealt with by material science.

Let’s see how this understanding of spirituality as a combination of philosophy and religion illumines the ‘spiritual-not-religious’ issue. Just as science requires some kind of experiment to be complete, spirituality requires some kind of religion to be complete. That is, spiritualists who want higher experiences need some process to get those experiences consistently. And that process would be their religion. So, to be spiritual, one would have to be religious in some way or the other.

Does this imply that one can’t be ‘spiritual-not-religious’?

In essence, the desire to be ‘spiritual-not-religious’ is the desire to be ‘open-minded-not-close-minded.’ The Vedic wisdom-tradition acknowledges that there are various ways to gain spiritual experiences, culminating in the experience of love of God. The philosophy aspect of the tradition help us sees the various great religions as authorized ways of progressing towards love of God. So, although it requires seekers to be religious if they want to be truly spiritual, it does not mandate close-mindedness but encourages open-mindedness.

Let’s use the analogy of health to understand this. The Vedic wisdom-tradition states our present materialistic state of consciousness is a diseased state, referring to it as bhava-roga. It recommends various processes like chanting the names of God that can take us back to our healthy spiritual state of consciousness and refers to these processes as cikitsa, treatment. The tradition is clear that the healthy spiritual state is not some vague misty feel-good experience, but is the steady state of being in which one loves God undistractedly. And the diseased state is the state of loving anything other than God. Significantly, love of God is also the universally accepted common goal of the world’s great theistic religions. The Christian saint St Augustine puts it well in one of his prayers: “You have made us for you, and the heart never rests till it finds rest in you.”

Let’s take a closer look at the three parts of this statement:

Many people merely read a lot of spiritual books, either as a hobby being uncommitted spiritual explorers or as a profession being academic scholars. But they don’t practice any religion. Consequently, they rarely realize, or experience as a reality, the subject that they are reading. By their refusal to practice any religion, they deprive themselves of such realization. So, their thoughts and talks about spirituality remain airy mental speculations without tangible connection with spiritual reality.

This discussion on ‘philosophy-without-religion’ applies to our discussion on being ‘spiritual-not-religious.’ If those wanting to be ‘spiritual-not-religious’ deliberately avoid religion in terms of not adopting any religious practices, then they will remain mental speculators. They may occasionally get experiences that they consider ‘spiritual’ but they will gain no lasting transformation of heart and so will not find enduring fulfillment in life.

However, if they want to avoid the close-minded mentality associated with being religious, then they can adopt those religious practices that allow them to be open-minded about other religious practices. Krishna consciousness certainly encourages that open-mindedness. So, in that sense, Krishna-devotees are ‘spiritual-not-religious.’

Posted In
Articles, Vedic Observer
Tags
About The Author

You might also like
ArticlesVedic Observer
MORE
Responding to attacks on devotees in Bangladesh
The Kashmir Files Reflection: Tolerance at the cost of truth destroys both
Prabhupada — the transcendentalist who embodied the best of the traditionalist, the existentialist and the utopianist
How to overcome hypertension, anxiety and depression during the pandemic
While the world slept …
By using the lower case pronoun for Krishna, aren’t you minimizing his position?
0 Comments
Leave a response