Hare Krishna Prabhuji, Many times we hear in maharaj lecture that kaikeyi is the symbol of ignorance and due to her ignorance she caused pain to ram and sita and all citizens. But my doubt is that kaikeyi ‘s boon may apparently seen as ram’s banishment but because of that only ram could forest and eventually he could kill ravana. If her curse would not have been there ramayana would not have been there. Please reply prabhu. 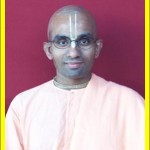 Bhavin Kataria
You might also like
Audio IconQA Audio : 2013Ramayana
MORE
Book distribution inspiration – how can we motivate ourselves spiritually for distributing Prabhupada’s b...
How do we balance spiritual life with material life?
When other sampradayas quote certain verses from scripture to prove that their particular founder is also an incarnat...
Cricket Mania A Bhagavad-gita perspective; Seeing Kishna everywhere as his vibhuti; Wellington 2022
Understanding dementia – A Bhagavad-gita perspective – Chaitanya Charan
If nature is inherently divine, then are the laws of nature, as explained by scientists, also divine?
Comments
Leave a response