For him, Back to Godhead was both the means and the end 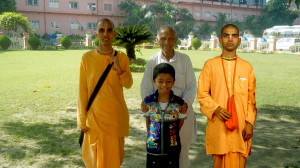 “If Srila Prabhupada could go door to door distributing Back to Godheads in the burning heat of Delhi despite his advanced age, why can’t I serve similarly in my own small way?” This thought galvanized Bhagavan Malwadkar, a retired college principal in India, who personally delivered Back to Godhead (BTG) magazines to 170 subscribers in 10 different cities, going to each of them month after month for thirteen years, serving them not just as a humble subscription deliverer but also as a venerable spiritual mentor. Baladeva das (the initiated name of Malwadkar) offered not only the tireless labor of the later half of his life to Krishna’s service thus but also the best fruits of the earlier half of his life – not just a lion’s share of his savings, but also his two sons, who are serving as brahmacharis in ISKCON. Reciprocating with his service, Krishna arranged for both of Baladeva Prabhu’s sons to be by his side chanting the holy names as he breathed his last at the age of sixty-six on 23rd March, 2014 in the auspicious morning hours.

A Principal with Principles

This remarkable life-journey began in the pious land of Sholapur, close to Pandharpur, the abode of Vithal, a celebrated form of Krishna immensely loved in Maharashtra. From childhood, Bhagavan grew up hearing the pastimes of Krishna and relishing the devotional songs of exalted Marathi saints such as Tukaram Maharaj. An excellent student, he chose to dedicate his life to education, becoming an exemplary teacher at the Chintamani Vidya Mandir, a college in Pune. Malwadkar Sir soon became respected for his competence at teaching, concern for his students and courage of conviction in maintaining his incorruptible integrity. In a country where education is worshiped with an almost religious frenzy and where educational failure is seen as a social stigma, students and parents often seek good grades by any means, sometimes bribing or even threatening teachers. Amidst it all, Malwadkar Sir stood tall, remaining unfazed and uncompromising even when goons sent by disgruntled parents of underperforming students threatened him. Once, when the disconsolate mother of a failed student sent her gold bangles with her son, asking that he be passed, Malwadkar Sir gently but firmly told the boy, “You don’t have to give me anything. Just give your studies more time. And if you have any difficulties in your studies, I will give you more time.” Due to his sterling qualities and his commitment to serving the student community, he went on to become the Principal of the college till he took voluntary retirement in 2002 at the age of fifty-four, wanting to devote himself more to spiritual growth.

On the home front, he married a pious lady, Shalini Upale (who later became Sura-priya devi dasi), and had three sons, Prashant, Siddhnath and Santosh. In the housing complex where he lived, Malwadkar would organize kirtan programs every Saturday evening, inviting different devotional groups to sing.

Siddhnath was my classmate at the Government College of Engineering, Pune, and was introduced to Krishna consciousness in 1997 through the weekly Bhagavad-gita program conducted at my hostel room. Both he and his younger brother Santosh became immensely inspired by the spiritual wisdom of the Gita and desired to dedicate their lives to sharing it by becoming brahmacharis. When aspiring brahmacharis tell their aspiration to their father, most fathers become infuriated or devastated, being unable to tolerate the idea of their son becoming the antithesis of their dreams: a shaven-headed robe-clad monk. In contrast, when his sons’ told him of their heart’s aspiration, Malwadkar replied with equanimity, “As a father, I am sad; but as a spiritualist, I am happy. And if doing this makes you happy, that will be my happiness.”

As a responsible father, he had already visited ISKCON when his sons started going there and had endorsed it as “a good spiritual institution.” From that level of distant appreciation, ISKCON rose to the level of his spiritual calling when he read the condensed-biography of its founder, Srila Prabhupada. The tireless, fearless and peerless struggles of Srila Prabhupada to share Krishna-bhakti all over the world became a life-transforming inspiration for Malwadkar. Becoming committed to serious spiritual practice, he soon received initiation from His Holiness Loknath Maharaj, getting the name Baladeva Das.

Being especially inspired by Srila Prabhupada’s BTG distribution in Delhi, Baladeva Prabhu took up the distribution of BTG’s Marathi avatar, Jau Devachya Gava, as his life’s mission. He distributed thousands of BTGs not only to the hundreds of people he knew from his earlier life as a principal, but also to hundreds of strangers who were attracted by his gentle and dignified presentation. Additionally, he felt inspired to make annual subscriptions for BTG so that people would have a regular monthly connection with Krishna. Within a short period, he made hundreds of subscribers. But the infamous unreliability of the Indian postal system made the delivery of the BTGs erratic. More than the dissatisfaction of the subscribers at not getting their money’s worth was the dissatisfaction of Baladeva Prabhu at not being able to keep his promise of sharing Krishna’s magazine regularly. In his typical roll-your-sleeves get-on-with-the-job attitude, he came up with a bold do-it-yourself solution: “I will deliver BTG each month myself.”

That many of his subscribers lived in different cities that were several hours away from Pune was no deterrent. That he would have to spend his own pension money to finance his distribution-journeys was no deterrent. That he would have to travel in noisy, stuffy, bumpy buses for several days each month was no deterrent. Month after month, for over a dozen years, he hand-delivered BTG to one hundred and seventy subscribers. For most of them, he became a loved elderly relative and a revered messenger of Krishna. He continued his personalized and personal distribution till nearly the last year of his life – even after a deadly abdominal cancer eroded his vitals and even after a major surgery sapped his remaining energy reserves.

A family united spiritually amidst calamity

More than a decade before cancer afflicted him, it had taken another toll in his family. In 2001, his wife was diagnosed with advanced breast cancer that had spread through the bones all over the body. He along with his sons gallantly stood by her side in the last leg of her life, doing everything humanly possible to assist her in departing with dignity in Krishna consciousness. (An article about her appeared in BTG earlier and can be read online here: How my cancer became a blessing).

Even before he came to know about his cancer, Baladeva Prabhu had, following India’s time-honored tradition of focusing on God in the later part of his life, started minimizing his worldly entanglements. He sold both his houses and distributed the money equally among his three sons. As two of his sons were brahmacharis (Siddhanath had become Sankirtan Anand das and Santosh had become Sundar Var Das), he gave their share as donation to the Pune temple. Wanting to live in the temple’s sanctified atmosphere and attend mangala-arti daily, he started staying in the temple’s crowded dormitory, as the small temple had no other facility. Although this was a great austerity for him given his advanced age and frail health, he accepted it gracefully and gratefully, focusing his mind on Krishna and preparing for the final exam of death.

During Baladeva Prabhu’s last year, Sundar Var Prabhu took off from most of his services as a senior brahmachari at ISKCON Pune and focused on taking care of Baladeva Prabhu. To offer better care than what was materially possible in the temple and what was spiritually possible in a hospital, Sundar Var Prabhu arranged for his father’s stay at the hospital-cum-home of Niraj Kamthe, an Ayurvedacharya and devotee, in Saswad, a suburb near Pune. There, one room with necessary medical facilities such as water-bed was arranged for Baladeva Prabhu and another room was arranged for his caregiver. In the last month of Baladeva Prabhu’s life, Sankirtan Anand Prabhu, who was now serving as a Temple Manager at ISKCON’s Kolkata temple, came to Pune and together both sons served as caregivers for their father in the improvised hospice.

Though his disease had now become devastating, Baladeva Prabhu, far from feeling sorry for himself, remained in Krishna consciousness, requesting several of his counselees to continue his program of personal delivery of BTG. He told Sundar Var Prabhu, “You are brahmacharis meant to serve Krishna. You shouldn’t be serving me like this, nor should I be taking service from you.” Sundar Var Prabhu replied, “If it had not been for Srila Prabhupada’s teachings, I would not be serving you. But having been blessed by those teachings, I cannot not be serving you.”

The devotee-surgeon who operated on him as a last ditch effort to check the cancer, Saraswati Mataji (Dr Mrs Jadhav) noted that though his cancer was at an advanced stage where the pain becomes unbearable and even drives people mad, Baladeva Prabhu remained stoic and focused on Krishna.

He encouraged all those who came to meet him during his last days to take spiritual life more seriously.

On his last Gaur Purnima, he fasted fully and remained very peaceful throughout the day. When asked about it, he replied, “I just couldn’t come out of Shantipura.” During his pilgrimages to Mayapur, Baladeva Prabhu had felt a mystical connection with Shantipura dham, the abode of Advaita Acharya, the associate of Lord Chaitanya whose fervent call caused the Lord to descend. On Lord Chaitanya’s appearance day, Baladeva Prabhu felt himself spiritually transported to Shantipura.

About a week before his departure, he offered his last good wishes and farewells to his relatives and then requested, “Please don’t allow any relatives to meet me – now onwards I want to focus on Vitthal alone.”
On his last night, he told his sons: “I feel as if an electric stove is burning in my body. Please help me remember Krishna.” Sankirtana Anand Prabhu described the spiritual world by reciting and explaining Brahma-Samhita verses and described Krishna’s sweet glories by reciting and explaining the gopi-gita.  Becoming spiritually absorbed, Baladeva Prabhu transcended the pain and remained in devotional consciousness till morning, when he told Sankirtan Anand Prabhu, “Now it’s morning – go and chant your rounds.”

His sons recognized based on signs of impending death given in Ayurvedic guidebooks that the end was now just minutes away. They called several more devotees to do kirtan. Then the devotees arranged to call on phone HH Lokanath Maharaj, who chanted the Hare Krishna mantra in his ears and encouraged him: “Remember Krishna.”

Three minutes later, at 6.57 am, Baladeva Prabhu departed from the world amidst the chanting of the holy names, leaving behind a legacy of hundreds of hearts that had come closer to Godhead being inspired not just by his vigorous distribution of Back to Godhead, but also by his dedicated living and leaving on the path Back to Godhead.

Baladeva Das was not just a tireless BTG distributor; he was also a prominent supporter and fundraiser for the Prabhupada Ghat project in Pandharpur and an active preacher in the Alandi-Pandharpur Dindi yatra (an annual mass pilgrimage of tens of thousands that lasts for nearly a fortnight). By his exemplary devotion, I am sure that he returned back to godhead.

Posted In
Articles, Practical Krishna Consciousness
Tags
About The Author

You might also like
ArticlesPractical Krishna Consciousness
MORE
Responding to attacks on devotees in Bangladesh
The Kashmir Files Reflection: Tolerance at the cost of truth destroys both
Prabhupada — the transcendentalist who embodied the best of the traditionalist, the existentialist and the utopianist
How to overcome hypertension, anxiety and depression during the pandemic
While the world slept …
By using the lower case pronoun for Krishna, aren’t you minimizing his position?
3 Comments
Leave a response