Scientism is the belief system that places the halo of omniscience on science. Scientism claims that all valid knowledge has to come only through the hallowed lanes of science – whatever comes from anywhere else is corrupted by the cardinal “sin” of being unscientific and so should be rejected as “untouchable.”

Ironically, the core claim of scientism that science has monopoly on human knowledge doesn’t come from science – there’s no scientific theory or experiment to substantiate it. Here’s why.

Science is essentially the investigation of and the theorizing about the natural order of things. Whether anything exists beyond nature or not is not a scientific question – it is a philosophical question. Those who believe there’s nothing beyond nature are known as naturalists. Naturalism and scientism are close cousins. Some, even many, scientists may be naturalists, but that is their individual philosophical position, not science’s universal presumption. Naturalists disingenuously masquerade their philosophy as if it were science and thus attempt to misappropriate the prestige of science for their own belief system. Such misappropriation ends up becoming a disservice to science, because it creates unnecessary hostility between science and non-naturalists who comprise the vast majority of humanity.

Nobel Laureate Sir Peter Medawar, despite being an atheist himself, strongly warns scientists against unwittingly playing into the hands of those who would

harm science thus. In his book Advice to a Young Scientist, he writes: “There is no quicker way for a scientist to bring discredit upon himself and upon his profession than roundly to declare – particularly when no declaration of any kind is called for –that science knows, or soon will know, the answers to all questions worth asking, and that questions which do not admit a scientific answer are in some way non-questions or ‘pseudo-questions’ that only simpletons ask and only the gullible profess to be able to answer.”

Given that science doesn’t have a monopoly on knowledge, which is the core claim of scientism, where does that leave scientism?

Exposed as not just faulty, but also self-contradictory.

Because the only way scientism can be true is if it were untrue. 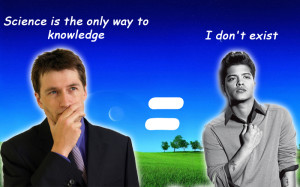 Scientism’s defining precept “science is the only way to knowledge” can’t be known through science – it needs to be known from some other way, such as the belief system of those making the statement. And as that belief system is outside the scope of science, scientism requires that there be some other way to knowledge apart from science. Thus, scientism’s core claim falls squarely in the genre of standard self-contradictory statements such as “I don’t exist” (I need to exist to say that). Put succinctly, the self-contradiction at the heart of scientism is: “Science is the only way to knowledge” (But knowing this requires some way of knowledge other than science.)

By thus being self-contradictory, scientism insults not only science in particular, but also to intelligence in general.

Why brook such insults?

You might also like
ArticlesFeatured ContentScience - Modern
MORE
Responding to attacks on devotees in Bangladesh
The Kashmir Files Reflection: Tolerance at the cost of truth destroys both
Prabhupada — the transcendentalist who embodied the best of the traditionalist, the existentialist and the utopianist
How to overcome hypertension, anxiety and depression during the pandemic
While the world slept …
By using the lower case pronoun for Krishna, aren’t you minimizing his position?
Comments
Leave a response