During my visit to Denver, I had the association of Keshava Bharati Maharaja on the morning before and after I gave the Bhagavatam class. Maharaja heard my class from his room and when I returned to meet him, he appreciated the class and blessed me with a tight, long embrace. Our meeting of minds was instant – when Maharaja with endearing humility stated that he was just a fool living on a hill, referring to his staying at the Govardhan ashrama, I felt inspired to play on the word “fool” which in Hindi means flower and replied, “Yes, Maharaja, you are a flower adorning Govardhana.” When I commented that many people reduce scriptural scholarship to the capacity for memorizing and quoting verses, he spontaneously moved forward and shook hands with me in agreement. When I asked Maharaja how he maintained warm relationships with devotees who held antipodal positions on various sensitive social issues, he quoted the Gita 6.9 about being equipoised towards all. In fact, he quoted it thrice during our hour-long talk. I consider the verses of the Gita to be among my best friends. And just as discovering a new facet of a friend thickens our bond with them, so too did the repeated and relevant usage of this verse by Maharaja thicken my friendship with it.

At the Bhakti Center in New York, I met Satyaraja Prabhu, one of our movement’s most prolific authors. He is one of my writing heroes and we are both Back to Godhead co-editors. While reviewing articles, we often have jovial and serious email exchanges. Appreciating my consistent writing, he had a couple of years ago lovingly deemed me “the Indian Satyaraja.” During our meeting, I reminded him of that and he joked, “Given how well you are writing now, maybe I should be called the American Chaitanya Charan.” When I protested that my writing was nowhere near his, he replied endearingly, “Ok, you be the Indian Satyaraja, I will be the American Chaitanya Charan. And we will be spiritual brothers.” He had attended my class at the Bhakti Center and he appreciated my quoting Woody Allen (“I am not afraid of death, I just don’t want to be there when it happens”). He told me that he is planning to imbibe Allen’s humorous style in his upcoming autobiographical book. We discussed various styles of writing and I marveled at his genius when he told me that he could envision in his mind a full article with its layout before he got down to writing it.

While in Los Angeles, I went to Santa Barbara to meet HH Giriraja Maharaja. As a disarmingly courteous host, Maharaja himself came out to receive us, then took me to his altar room and blessed me with his association for over 3 hours, 2 hours exclusively and 1 hour during a group lunch. I have served Maharaj as an editor for several years. During the course of the service, our candid and deep interactions, many over email and some in person, have made him one of my closest spiritual uncles. After talking about various contemporary issues, we focused on the book that Prabhupada had asked him to write: the history of ISKCON’s Juhu temple. We discussed how to diversify into new genres of writing, how to overcome writers’ block and how to synergize speaking and writing. I explained my idea for a new book called “The yoga of journaling” wherein I plan to channelize the New Age interest in journaling towards helping readers use their intelligence as the counselor of their mind, thus subtly conveying the Gita’s insights about our inner landscape. Maharaja liked the idea and gave his blessings for the book. When our meeting concluded, Maharaja offered his best wishes for the rest of my US trip. I thanked him and responded, “Maharaja, the best of my US trip has already come now that I have got your association.” 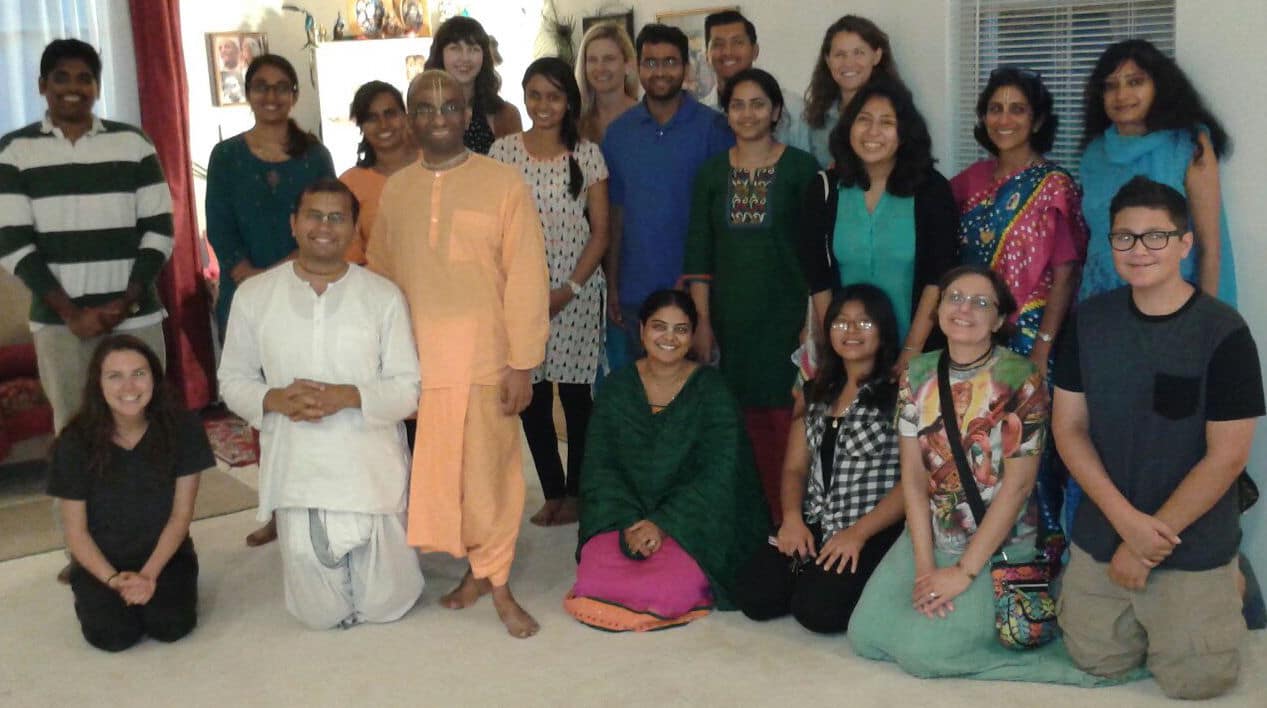 Whenever I travel by flight, I ask for a wheelchair. At Indian airports, the wheelchair assistant had always been a male. When I had gone to Australia six months ago, I was escorted for the first time by a female assistant. Initially, I was taken aback, but over time, I have got used to female wheelchair assistants – they are usually middle-aged with a matronly air. But at Seattle, I was escorted by a young female wheelchair assistant who was iPhone-toting, gum-chewing and endearment-uttering. Every other sentence she spoke to me was filled with “honey”, “darling” and “dear.” Maybe it was a part of her normal behavior or maybe it was a front for getting a bigger tip, but her familiar manner left me discomfited. Still, seeing the whole situation as a test, I endured it.

While traveling, I usually don’t talk with neighbors except for an initial courtesy greeting. Departure from any place is usually preceded by some intense socializing. By the time such socializing ends, my introvert nature is screaming for oxygen, and I need to attend to it by tuning out the rest of the world and focusing on some intensely introspective activity such as praying or reciting verses or chanting or journaling. And my travel-neighbors, respecting my preoccupation, don’t usually initiate any conversation. But not always.

When I was going on a flight from Columbus to Charlotte en route to Boston, the middle-aged lady sitting next to me greeted me with a bright smile. As I returned her greeting and settled into my seat, she peered at me and then asked excitedly, “By any chance, are you a monk?” I nodded, feeling apprehensive at her excitement. On my affirmative response, she moved towards me, as if to embrace me. Maybe it was just my imagination or maybe she checked herself on seeing the alarm on my face. Anyway, she squeezed my shoulder and said, “During my last three trips, I have found myself sitting next to an Indian – and we had such interesting talks. I am so delighted to have an Indian monk sitting next to me now.” She had read the Gita and was very interested when I told her about gitadaily. We had a nice talk, though my cold prevented it from going on for too long. When she got off, she suddenly turned around, put her hand on my chest, smiled and told me, “Hope you recover from your cold.” We monks refer to women as mothers (mataji). I hadn’t addressed her thus, thinking that she as an American would find that form of address unfamiliar, even odd. Yet I couldn’t but be touched by her maternal concern.

On another occasion, I gave a talk at the Oregon State University (OSU) on the topic, “The Search for Happiness – Collecting the material or recollecting the spiritual?” A girl, who was studying environmental science and had come for the first time to the yoga club, was very interested throughout the class and asked a good question. When the class ended, she came forward with a bright smile to shake hands with me. If she had been an Indian woman, I would have folded my hands in Namaste, but she probably had no idea what that meant. Did I have a right to reject her courteous expression of appreciation, which was meant for the deliverer of Krishna’s message, just because it was offered in a cultural form incompatible with a monk’s code of avoiding physical contact with women? A few days ago, a senior devotee had told me that during his morning walks Prabhupada always greeted people with “Good morning” – not “Hare Krishna.”

Deciding that my role as a spiritual teacher was more important than my role as a monk, I shook hands with her for just a moment. It was after twenty years that I shook hands with a woman. Actually, I don’t remember shaking hands with any woman ever, but I must have received some congratulatory handshakes from my female co-students after I had cracked GRE in college some two decades ago.

I had hoped that shaking hands would be the end of it. But far from it, she asked whether she could have a photo clicked with me. Where I come from, the idea of a monk posing for a photo with a girl was unacceptable. I looked around for the organizers to intervene, as they would probably have in India, but they seemed to have gone missing in action. I had known for long that my social reflexes were much duller than my intellectual reflexes, but just how dull they were I came to know in the next few moments. As I was trying to wrap my head around her request and think of a courteous way of declining, I saw her giving her phone to a friend and coming to stand next to me. Maybe I shook my head in amazement at the bizarre idea and she took that as an assent. And before I could do anything to stop it, the photo had been clicked. Alarm bells started ringing in my head as it filled with the specter of someone googling me and finding my picture with her. Jolted into action, I tried to salvage the situation by asking all the other students there to come for a group photo and requested her that if she planned to put any photo on Facebook, she put the group photo and not the photo of just the two of us.

How far apart were the cultural universes that we monks have to navigate became clear to me that evening when I came to the Seattle temple for a program. While entering the temple building, my crutches slid on the somewhat slippery floor and I fell forward. For me, such falls are not uncommon, but for onlookers, they are often causes of alarm. The devotee who was escorting me to the temple hall immediately picked me up from the left shoulder and a mataji who had been watching me enter sprang forward to help me rise from the right. Maybe someone glanced disapprovingly at her, but for whatever reason, as soon as I rose, she shrank back, apologizing for having touched me. I reassured her that she had done nothing wrong, thanked her for her help and moved on, thinking about the radical contrast in cultural expectations between the afternoon handshake and the evening shoulder-lift. I realized how the culture in India protected monks, and I appreciated more those who were striving to be monks outside that protective culture. If faced with shaking hands with a woman again, I will probably err on the side of caution and politely refuse, explaining my culture’s way of greeting with folded hands.

Practicing monkhood in a non-devotional culture doesn’t come with a clear-cut instruction manual. We have to use our intelligence, pray for pure intention and do our best. Sometimes we get it right and sometimes we don’t. That’s life.

You might also like
ArticlesHindi LecturesVedic Observer
MORE
Responding to attacks on devotees in Bangladesh
The Kashmir Files Reflection: Tolerance at the cost of truth destroys both
Prabhupada — the transcendentalist who embodied the best of the traditionalist, the existentialist and the utopianist
How to overcome hypertension, anxiety and depression during the pandemic
While the world slept …
By using the lower case pronoun for Krishna, aren’t you minimizing his position?
1 Comments
Leave a response