“I had a near-death experience nearly two decades ago,” spoke a Chinese lady professor who had approached me after my talk on “Science & Spirituality – Exploring near-death experiences” at the National University of Singapore. As a speaker who loves to answer questions after my talks, I train myself to expect the unexpected during the post-talk QAs. And yet the sheer unexpectedness of some questions periodically surprises me.

I had written and spoken about near-death experiences, but hadn’t met someone who had actually had one. I listened, intrigued, as she explained that some nineteen years ago, she had had a medical emergency. While she was lying unconscious, she had seen herself leave her body as an effulgent brown particle. The particle, that she understood was her, had floated into a river that went through an underground tunnel. When she had seen a log of wood floating nearby, moving atop it had taken her ashore. There, she had seen walking towards her two men – one elderly, one young. As they closed in on her, they had suddenly disappeared. Concluding that the next thing she remembered was waking up in a hospital bed, she asked what the experience meant.

I answered that more important than the specifics of what she saw was the implication of the overall experience – even when her body was unconscious, she was still conscious. Her continuing consciousness amidst bodily unconsciousness implied that her consciousness didn’t come from her body; but came from something beyond it – from something that continued to exist independent of her body. Exploring the identity of that non-material essence would be far more valuable and consequential than trying to decode the specifics of the experience. If the higher powers that had enabled her to have this special experience had deemed the specifics important, their meaning would have been revealed to her. Since no such meaning had been forthcoming for so long, it was reasonable to infer that the specifics were not all that important. What was much more important was the universal implication: she, at her core, was different from her body. The yoga tradition, and specifically the yoga masterpiece Bhagavad-gita, explained the identity and nature of that non-material essence. By reading the Gita, she could learn far more about herself than she could by trying to decrypt this experience’s specifics.

With a grateful smile, she replied that she felt relieved of an unexplained mystery that had burdened her for so many years.

Another kind of near-death experience

During the Brisbane leg of my Australia tour, I had gone for about twenty-four hours to New Govardhan, ISKCON’s farm community at Muruwillambah. The South Indian-sounding name reminded me that even in a modern Western country like Australia, there had been not so long ago natives whose culture bore many similarities to traditional Indian culture. While I was giving the afternoon Sunday feast class on the occasion of ISKCON’s fiftieth anniversary celebrations, I was suddenly told to stop because an electric pole had fallen nearby, cutting off power in the community. As live currents were going around in the vicinity of the fallen pole, security experts had ordered that the program be ended immediately and prasadam be served as soon as possible so that people could go home before it became dark. After I ended the class, I came to know that a live wire had fallen right on the car in which we had come. If we had been in that car when the wire fell, we might well have been electrocuted.

We spent the night without power – something I would have expected more in India than in Australia. As I journaled in torchlight, I noted that beneath the comfort and convenience of things in advanced countries remains the underlying universal truth: Material nature can assert her superiority over us humans anyplace, anytime, anyway.

Next morning, after I gave the Bhagavatam class, the devotees managed to tow out our car from the endangered area just in time for us to rush for our flight back to Melbourne.

Traveling in planes brings regular reminders that we are always close to death. The airline staff’s recitation of safety procedures highlights the danger that may befall us while we are comfortably seated in our flights.

Near death and paranoia

Of course, the awareness that we are near death is not meant to make us paranoid. I was asked a question on my website thespiritualscientist.com by a lady: “I have suffered from paranoia since childhood and have periodically needed medication to control it. After hearing an ISKCON class about how death can come any time, my paranoia shot up so much that my doctor had to increase my medicines manifold. He told me that hearing such classes is psychologically damaging and that I should stop hearing them. What should I do?”

As the subject was complex, I decided that it deserved not just a short answer, but a full class-length analysis. I got that opportunity in Perth during the Bhagavatam class as that day’s verse dealt with the theme of death. I explained that spiritual advancement comes not just by our focusing on a particular object of thought, but also by our changing our basic mode of thinking. How we think about anything, even death, depends on which mode of material nature we are in. If we are in the mode of ignorance, thinking about death can make us paranoid, paralyzed, psychologically damaged. If we are in passion, thinking about death can increase our enjoying mentality as we may feel that bodily pleasures will not be available in future. If we are in goodness, thinking about death can inspire us to seek life’s immortal side, thereby energizing our desire to devote ourselves to Krishna. We all need to intelligently choose things that are favorable to our bhakti and avoid things that are unfavorable. If thinking about death makes us paranoid, then we should see such thinking as unfavorable to our bhakti and avoid it. We can instead focus on thinking of Krishna and engaging in his service. The resulting purification will gradually raise us to goodness; then we will be able to think about death in a way that is favorable to our bhakti.

I see myself more as an educator than as a crowd-puller, so I prefer to give a series of classes to the same audience at one place than to give several programs at different places to different audiences. Accordingly, the organizers of my Australia tour had arranged several lecture series for me. Among the around sixty talks that I gave in about forty days, nearly thirty of them were parts of a series.

Some of the series were:

Though these talks were primarily for devotees, an Australian lady, who had been exploring various kinds of healing, happened to come to the temple on that day and attended my talk. Afterwards, she asked me whether chanting and healing were related. I explained how chanting brings about spiritual healing and how it can be seen as namo-therapy, therapy centered on nama, the holy name of Krishna.

I explained how our Gaudiya tradition had been born amidst circumstances far more aggressively hostile than what most of us face nowadays. When a Vaishnavi asked who had damaged Indian culture more – Muslims or Britishers – I answered that it was the Hindus. Because the brahmanas had been self-righteous and arrogant about their high-born status, they hadn’t cared about lower caste people getting converted. Because the kshatriyas had been complacent and contentious, they had kept fighting among themselves and failed to unite against external threats. In general, the more we take responsibility for our situation instead of playing victim, the more we can tangibly improve things.

Among all my lecture series, this was the most challenging and fulfilling because it gave me an opportunity to serve for the first time in my life the four verses that are the essence of the Bhagavatam. After a class, during prasad, I head several devotees laughing and discussing the class, specifically an example illustrating how the same Absolute Truth manifests as Brahman, Paramatma and Bhagavan. If the Absolute Truth is compared to a delicacy like halva, the halva that is just smelt is Brahman; the halva that is smelt and seen is Paramatma; and the halva that is smelt, seen and tasted is Bhagavan.

These four verses are for me the sweetest in the whole Uddhava Gita. Herein, Krishna remembers the Vrajavasis, especially the gopis and their exalted love for him. After my second talk “Uddhava Gita nectar 2 – Love explained – Comparing materialist, Abrahamic, impersonalist and bhakti worldviews”, a Western Vaishnavi said that she was thrilled to understand how bhakti offers the deepest understanding and fulfillment for our longing to love and be loved. 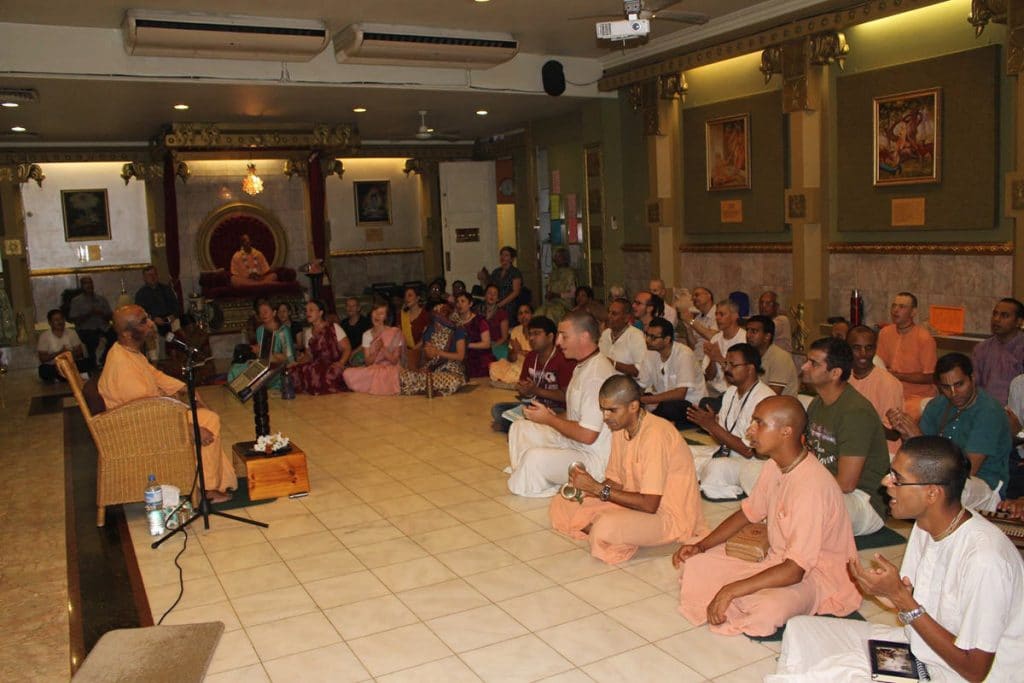 I spoke on the distinctive contributions of the Gaudiya tradition such as achintyabhedabheda, rasa and prema. After a talk, a devotee asked whether such subjects weren’t too exalted for today’s world. I agreed and added that still they are central to our tradition and need to be relished after due caution – if serious devotees in our movement don’t discuss and cherish them, we may unwittingly grant monopoly on our tradition’s core to other Gaudiya groups who explain that core.

I explained in essence that our purpose shouldn’t be just to speak the truth, but to speak the truth in a way that attracts people to the truth, not alienates them from it. After my talk, a Vaishnavi, who is from a Shakta Bengali background, explained that my talk spoke for her. When she had come to the temple the first time and had seen matajis making garlands, she had joined them in threading flowers into garlands. A devotee had suddenly come there and asked her whether she ate meat. When she had nodded mutely, that devotee had grabbed the garland she was stringing and hurled it on the ground, shouting that she shouldn’t even touch the flowers to be offered to the Lord. She had left the temple, heartbroken, with tears in her eyes. To her credit, she came back when she met some other, more sensitive devotees – and is now an initiated devotee. She and her husband told the organizers of my talk that ISKCON outreach could reach many more people if devotees would stop being so judgmental towards newcomers and their initial beliefs.

To be continued in part 02

Posted In
Articles, Vedic Observer
Tags
About The Author

You might also like
ArticlesVedic Observer
MORE
Responding to attacks on devotees in Bangladesh
The Kashmir Files Reflection: Tolerance at the cost of truth destroys both
Prabhupada — the transcendentalist who embodied the best of the traditionalist, the existentialist and the utopianist
How to overcome hypertension, anxiety and depression during the pandemic
While the world slept …
By using the lower case pronoun for Krishna, aren’t you minimizing his position?
Comments
Leave a response