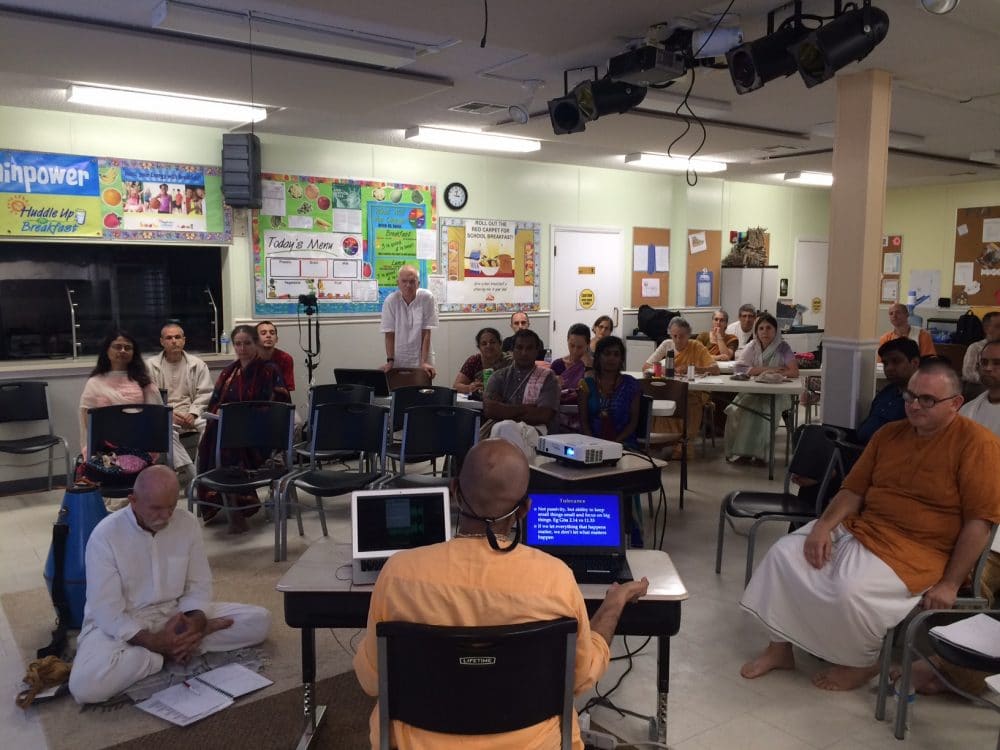 When I came to Alachua, Florida, USA, last year, I felt embarrassed to speak about Krishna to an audience primarily of senior devotees, many of whom are Prabhupada disciples. Still, they have been very kind to encourage me and appreciate my classes.

This year, Janmashtami Prabhu, who had started the Mayapur Institute (MI) in Mayapur and has started a Krishna Institute here for similarly revitalizing an educational ethos in our movement, asked me to speak on a workshop entitled “Relishing Shikshashtakam” at the Alachua Learning Center.

Fifty-seven devotees participated in the three-day workshop from 3rd to 5th Sep, 2016, with around forty-five of them being non-Indians and over a dozen being Srila Prabhupada disciples.

I spoke on the Shikshashtakam in twelve talks each of about one hour and fifteen minutes. The first text took three talks and the third took two talks, with all the other texts covered in one talk each.

All the talks are available here. Shikshashtakam – 12-part series at Alachua

The Shikshashtakam talks about exalted levels of consciousness and, also in its later verses, about esoteric states of devotion. I tried to take those lofty topics as starting points for descending to the practical challenges in our life as seekers.

After the course, a sentiment echoed by several devotees was that though they had been reciting the Shikshashtakam for decades, they hadn’t realized its practical relevance till now.

One devotee liked especially the point that the flow of the Shikshashtakam shows how from the holy name, Krishna manifests – the first text starts with the focus on the holy name and the last verse ends with a focus on Krishna. By systematic sustained meditation on the holy name, the holy one who is called by the name reveals himself. The Shikshashtakam thus teaches us to see chanting not as an isolated activity of uttering a mantra, but as an integral limb of developing a relationship with a living, loving person.

I relish the opportunity to go deep into a subject systematically, something that is not possible in one hour classes and even less so in the short Gita-daily articles. So, I saw this course as a blessing for dovetailing my interest in Krishna’s service.

Some devotees encouraged me to make the course into a book or at least a booklet. I would love to do that, and I pray that I can give up my laziness and make time for doing so. Till then, at the very least, I can recite the Shikshashtakam with deeper absorption and appreciation, and strive to better apply its shiksha in my own life.