Speaking on the Mahabharata outside Bharata – at Princeton 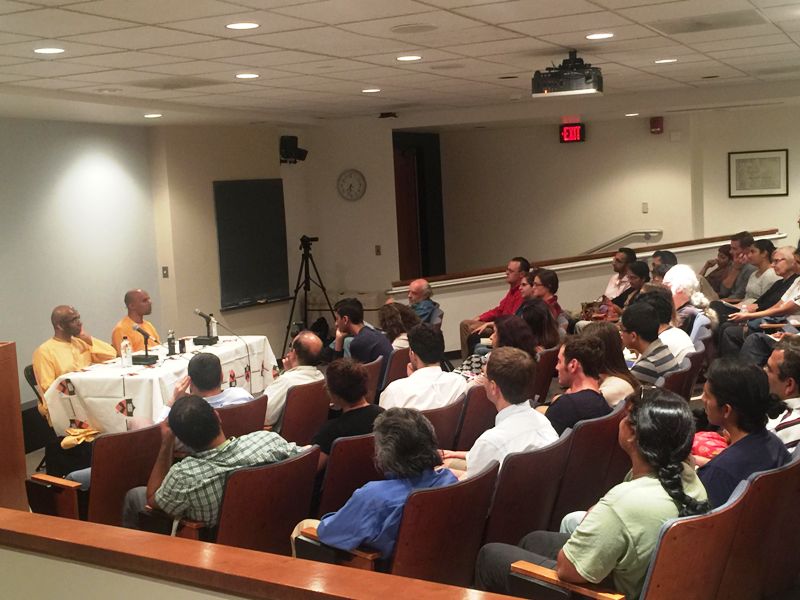 During my visit to Central New Jersey, on 18th September, 2016, Govinda Prabhu and I spoke at Princeton University on the topic of “Tragic Hero? Lessons from the life of the Mahabharata character Karna.”

Vineet Chander (Venkat Bhatta Prabhu) serves as the Director of Hindu Affairs at Princeton University; and he had invited me to speak on this topic. Later, it turned out that Govinda P was also there in Central New Jersey at the time of my program. So, both of us were asked to speak together.

I found it striking that while I have spoken at many colleges in India, I have never spoken on a directly scriptural topic in an Indian college. And yet here I was in an American university – and one of the world’s top universities at that – speaking on an openly scriptural topic. What was even more intriguing was that nearly 50% of the audience was non-Indians – professors and students of South Asian religions.

Addressing the negativities that befell Karna, Govinda P spoke on how we all need to look for opportunity more than for sympathy. Addressing the Karna-Duryodhana friendship, I spoke on how a low self-esteem makes us emotionally vulnerable to be manipulated by whoever seems to offer us respect. I largely spoke on the points I have written in

After the talk, on seeing the intense interest throughout of a pan-Indian and a non-Indian audience, I felt reinforced in my conviction realized that sharing life lessons through epics comprises an appealing and powerful way of connecting scriptural wisdom with people’s practical concerns – a way that we bhakti teachers need to tap much more effectively.