Moments of bhakti & momentum in bhakti 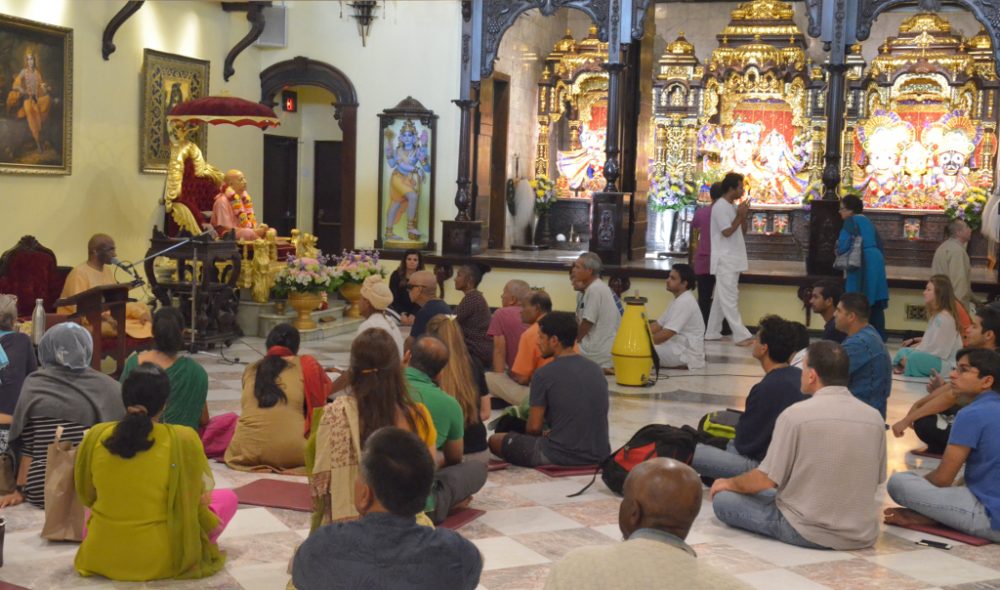 The major difference between ISKCON temples in India and in the West that struck me was the difference between weekday activity and weekend activity. As the Indian temples have vibrant monasteries associated with them, these temples are active throughout the week. But most temples in the West have no monasteries at all; so, the activity level there is vey low during weekdays and shoots up during weekends. The highlight in the weekend is the Sunday feast program, where a large part of the local devotee community congregates for association and inspiration.

During my tour to the West, I gave Sunday feast classes at Washington D C, Central New Jersey, Columbus, Los Angeles, Toronto (in Canada) and Leicester (in UK).

Each Sunday feast program would have on an average an audience of several hundred with the number ranging from hundred to four hundred.
Typically, the audience comprised both Indians and Westerners of various levels of spiritual understanding and seriousness. The challenge would be to connect with all of them and give everyone something that they could carry home. This challenge is like that of a teacher, who usually teaches students at a particular grade, being asked to speak to the school general assembly that contains students from all grades. The strategy that I found works best is to start with a level that even new people can connect with, rise step-by-step to a level where even regular practitioners feel that they are getting something substantial and then conclude with a call for action that resonates with everyone, whatever their level. The Sunday feast program is meant to be a moment of bhakti that will give participants momentum in their bhakti for the rest of the week till they can renew themselves at the next week’s Sunday program.

To give a sample of a typical Sunday feast program in the West, here’s an outline of the program at the Los Angeles temple, where I spoke on “Seek not moments of bhakti – seek momentum in bhakti.” Addressing the New Age tendency to reduce spirituality to sporadic spiritual experiences and the Hindu ritualistic tendency to equate spirituality with ritual specialization, I spoke about how bhakti is a transformational process in which our progress depends not on how we feel from moment-to-moment, but on how we contribute consistently, trying to cultivate a service attitude. Whether we get dreams about Krishna is not as defining of our spiritual growth as whether we serve him after waking up. Srila Prabhupada is the quintessential model for understanding bhakti as dedication to service – and how such dedication eventually attracts extraordinary reciprocation from Krishna that is nothing short of miraculous.

Among the several questions that came up after the talk, the most challenging was: “How has the momentum of bhakti helped you face problems in your life?”

The challenge I face when speaking about myself, especially to an audience where few people know me, is to be candid without being self-promotional. I spoke about how several years ago while sickness had immobilized me, I had been giving an online audio class through Skype from my hospital bed. Getting absorbed in the subject, I had closed my eyes and continued speaking for nearly fifteen minutes without realizing that the Internet connection had got lost and the audience was no longer hearing me. When I realized what had happened, I was momentarily exasperated at having wasted so much time, but somehow the thought struck me: “While I was speaking about Krishna, I was satisfied, with or without audience. Therefore, for speaking about Krishna, I don’t need an audience in front of me.” And from that thought emerged the idea of doing recordings of question-answers, talks and courses, which opened a whole new universe of online outreach for me. Generalizing from my specific experience, I concluded: “When some door closes in our life, Krishna opens some other door; we just need to stop glaring at the closed door and open our heart to Krishna’s guidance.”
I don’t know if my Sunday talks helped the audience gain some momentum in their bhakti, but seeing their sincerity and eagerness in wanting to know about bhakti certainly increased my momentum for sharing bhakti.