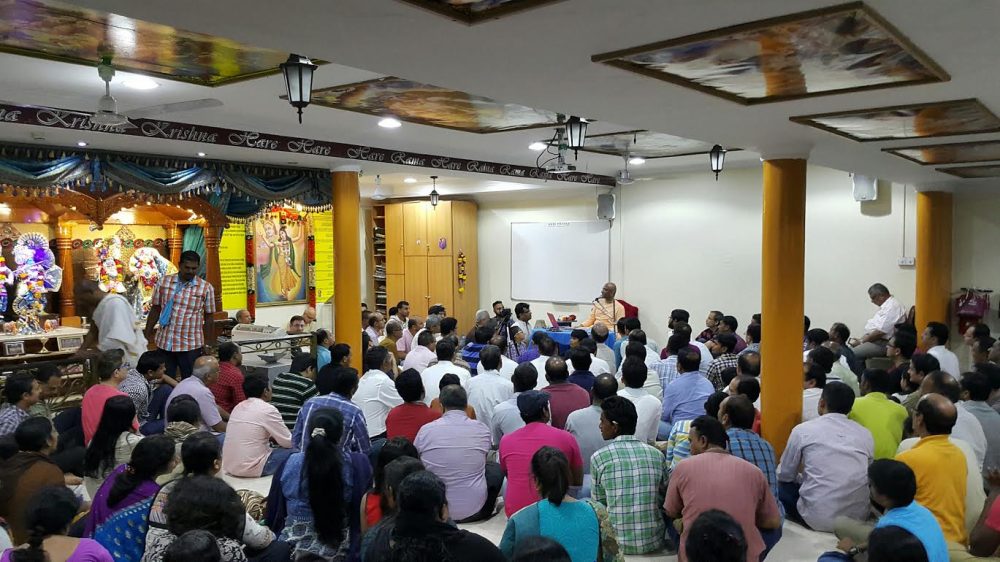 During my five-day visit to Bahrain in 2016, I spoke a four-part series on the Bhikshu Gita, a section from the Uddhava Gita in the Srimad-Bhagavatam. This song of the mendicant contains penetrating insights about the nature of the mind and its pivotal role in aggravating our distresses.

During the series, the discussion spontaneously evolved towards how the mind affects our relationships. I analyzed how our mind’s preconceptions and misconceptions lead us to snap judgments about others, thereby hurting our relationships with them. Overall, I tried to open the audience’s minds to appreciate the difficulties others have in overcoming their conditionings.

Later, I heard from devotees about their overall positive experiences while practicing bhakti in Bahrain. As a part of the government’s “This is Bahrain” program, the devotees had done their first public kirtan recently and had even been included as a part of a Bahraini delegation to a global summit of inter-religious harmony.

It was revealing to know that when Bahrain had its own version of the Arab Spring a few years ago, the protesting Bahrainis had conscientiously avoided targeting any of the immigrants’ vehicles (“We have nothing against you.”) or even the government buildings (“Our protests are against the rulers – why should we damage our own nation’s property?”) Although the protests had eventually been crushed violently by the government, the protestors hadn’t resorted to vandalism, thus countering the prevailing stereotype that people of a particular religion resort to violence at the slightest provocation.

I was reminded forcefully that no blanket label applies to any group of people. People everywhere are essentially the same – and the wide spectrum of various kinds of people can be found in any cross-section of society. The Bhagavad-gita (18.20) states that knowledge in the mode of goodness means to see the similar spiritual essence in all living beings, whatever be their bodily coverings. It struck me that while I was speaking to help my audience open their minds, hearing from them was opening my mind too. During traveling preaching, this realization has come upon me repeatedly: what I teach may benefit others, but what I learn benefits me much more.

On a separate note, I had just returned from a two-month tour of the West, where having over a hundred people attend a program was a luxury reserved only for Sundays. But here in Bahrain, having nearly two hundred people attend programs every day, for five days in a series, was an encouraging testimony to our movement’s vibrancy – and to the Bahraini devotee-leaders’ dedication.

Apart from the series on the mind, I also gave five other classes. To the teenagers of the community, I spoke on “Navigating the emotional and social turbulence of adolescence.” To a well-wisher whose brother had suddenly passed away, I spoke on “Learning from the guru named death.”
My trip to Bahrain was coordinated by Krishna Prema Prabhu, who was one of the founding doctors of the Bhaktivedanta Hospital and is doing powerful preaching in Bahrain. He has attracted many doctors to the practice of bhakti. Rarely do I have to ask others for the meanings of English words, but when he introduced the doctors he had cultivated, many of them were specialists in areas that I was only vaguely familiar with. I was encouraged to see that our movement in Bahrain was attracting such well-educated, intelligent people – not just the masses, but also the classes.

Much of Bahrain comprises land that has been reclaimed from the ocean – something that is considered a remarkable feat of material progress. I felt enlivened to see that our movement in Bahrain has achieved a similar spiritually remarkable feat: amidst the ocean of Kali yuga in the middle of a place that was traditionally considered deeply in the throes of the darkness of illusion, our movement has reclaimed many, many souls.

The links for the lectures I gave in Bahrain are here:

Bhikshu Gita 2 – The mind makes it difficult for people to change – be understanding (Srimad Bhagavatam 11.23.43)

Bhikshu Gita 4 – The mind distracts us from bhakti in the name of bhakti (Srimad Bhagavatam 11.23.45)

QA on Practical application of bhakti

Navigating the social and emotional turbulence of adolescence

Learning from the guru named death