Feasting on Krishna’s glories on Ekadashi 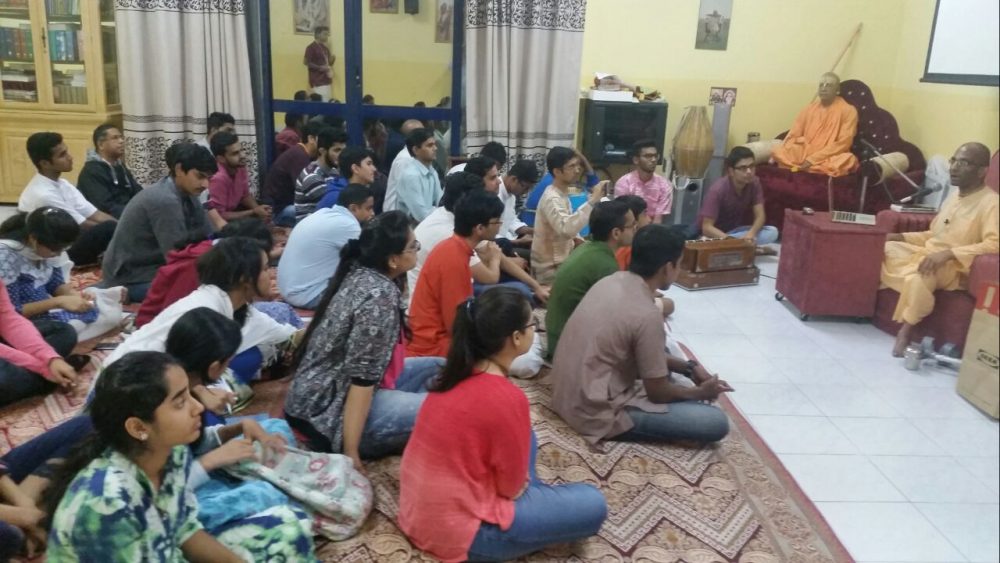 During my last full day in the Middle East, on 25th, which happened to be Ekadashi and which also happened to be Friday (the weekly holiday in the Islamic world), it worked out that I had to give five classes in three different cities. For over a decade and a half, I have been fasting on Ekadashi, taking only water or at the most ginger water or lemon water. Over the years, I have found that while fasting, speaking for several hours is not as draining as traveling to various places. During my US tour in 2015, I had to travel on Ekadashi to three places – Portland, Oregon and Seattle – and give three classes. But this Middle East Ekadashi turned out to be even more draining, and far more uplifting.
I had a morning class in one city where I spoke to an audience of three hundred on Why Rama banished Sita. Thereafter, a two-hour drive brought me to the next city, where I was astonished to see a crowd of over five hundred performing a rousing kirtan indoors. I spoke on Help your mind to learn using association and intelligence explaining how bhakti can help us manage our mind more effectively. The talk was followed by several technical and unusual questions such as:
What was the technology of the pollution-free Pushpaka vimana?
If someone says the sparks of Krishna’s splendor are enough for me, how can we connect them with Krishna?
Then, that evening, I spoke at a youth meeting on Counter the inner negative conversation of doubt and desire, where I spoke how Gita wisdom can help us counter the negativities and insecurities that the mind creates in all of us, especially in adolescence and youth.
After that, I traveled to a third city, where again nearly three hundred people had assembled in an open-air program in a garden outside a devotee’s villa. There, I spoke on “What cricket can teach us about life.”
At around 10.30 pm, when I reached the place where I was staying, I was told that that devotee had called nearly fifty of his Bhakti Vriksha members and they were all waiting. This talk was unplanned and I was dead tired. As I was about to self-righteously explode against that devotee for so inconsiderately stretching me so much, I had a flashback: over twenty-five years ago, I had one day stayed awake late into the night after an exhausting day, just to watch a day-night cricket match. That memory steeled me: If I can stretch myself for cricket’s sake, why can’t I stretch myself for Krishna’s sake?
I spoke briefly on The world sees results, Krishna sees efforts. I took my tiredness as an excuse to speak most of the talk with closed eyes, and within minutes I realized that I was absorbed in Krishna’s glories – my tiredness disappeared, and I felt solace and strength in meditating on the spiritual sound.
Irrespective of whether the content was inspiring or not for the audience, the absorption in Krishna was inspiring for me.
Long ago, my spiritual master had said that, even when Krishna’s message comes from us, we should hear it attentively because what we speak is meant for us too, not just for others. Here, I got some realization of that insight which I had heard in Mumbai – and I hope to carry that realization wherever I go.