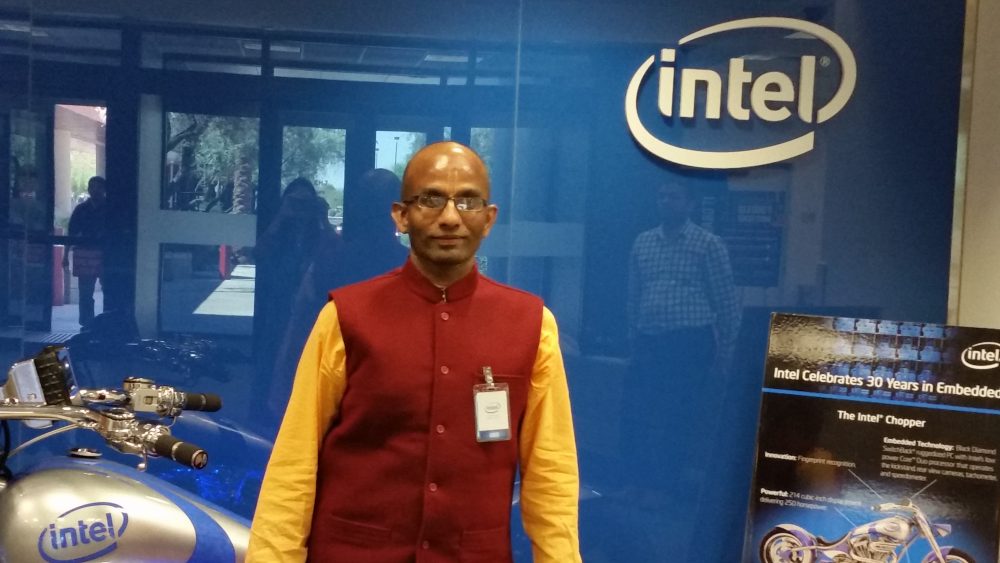 Perhaps the most significant program during my Western trip was a seminar at Intel, in Phoenix, Arizona, on the topic “MIND the MIND.” It was attended by around 25-30 Intel employees, who were engrossed in the subject throughout the whole talk.

How we defeat ourselves:

How can we stop defeating ourselves:
1. Meditate
2. Illuminate your inner world
3. Navigate your inner pitfalls
4. Do it with others

The feedback after the talk was that the content was simple and clear – the double acronym structure helped them understand readily where I was in the overall context of the talk.

During the QA session, a South American Intel employee asked whether we can ever come to a stage when the voice of wisdom within us becomes stronger than the voice of impulse. I answered that it is possible by studying wisdom-literature, adopting spiritual practices and especially by seeking the right social circle. After the program, she approached me and said that she came from a conservative family and had felt intense peer pressure to conform with the materialistic US culture. But on understanding the spiritual worldview and specifically the strategies for strengthening the conscience in the class, she felt inspired to stick to her higher values.

The program was organized by Sapna Kant (Shriji Priya Devi Dasi), who works in Intel, and her husband Eshant Garg (Ishvara Gauranga Das ). They coordinate my online outreach. Being the first program of its kind at Intel, Phoenix, they had to expertly get the program sanctioned through the Intel hierarchy. MNCs such as these are particularly cautious to not promoting anything sectarian.

The Intel India coordinator had been apprehensive about having a Hindu monk speak in their company. But he was relieved and pleased to see the positive feedback, especially by the non-Indians attending the program. And he said that the next time when I come to the US, they could organize a two- or three-part series.
Due to security and privacy considerations, Intel didn’t allow us to video record or even photograph the program, though they themselves clicked some photos and shared them with us.

I have spoken at several MNCs in the past, but Intel was the biggest MNC where I spoke. My small realization is that ultimately a similar heart beats in all people, whichever country they may be from and whichever company they may be working for. They all face the same eminently human issues that we all face – dealing with the mind’s stresses, and seeking greater satisfaction and better contribution. And for addressing those universal issues, the Bhagavad-gita’s timeless wisdom stands ready to empower everyone.