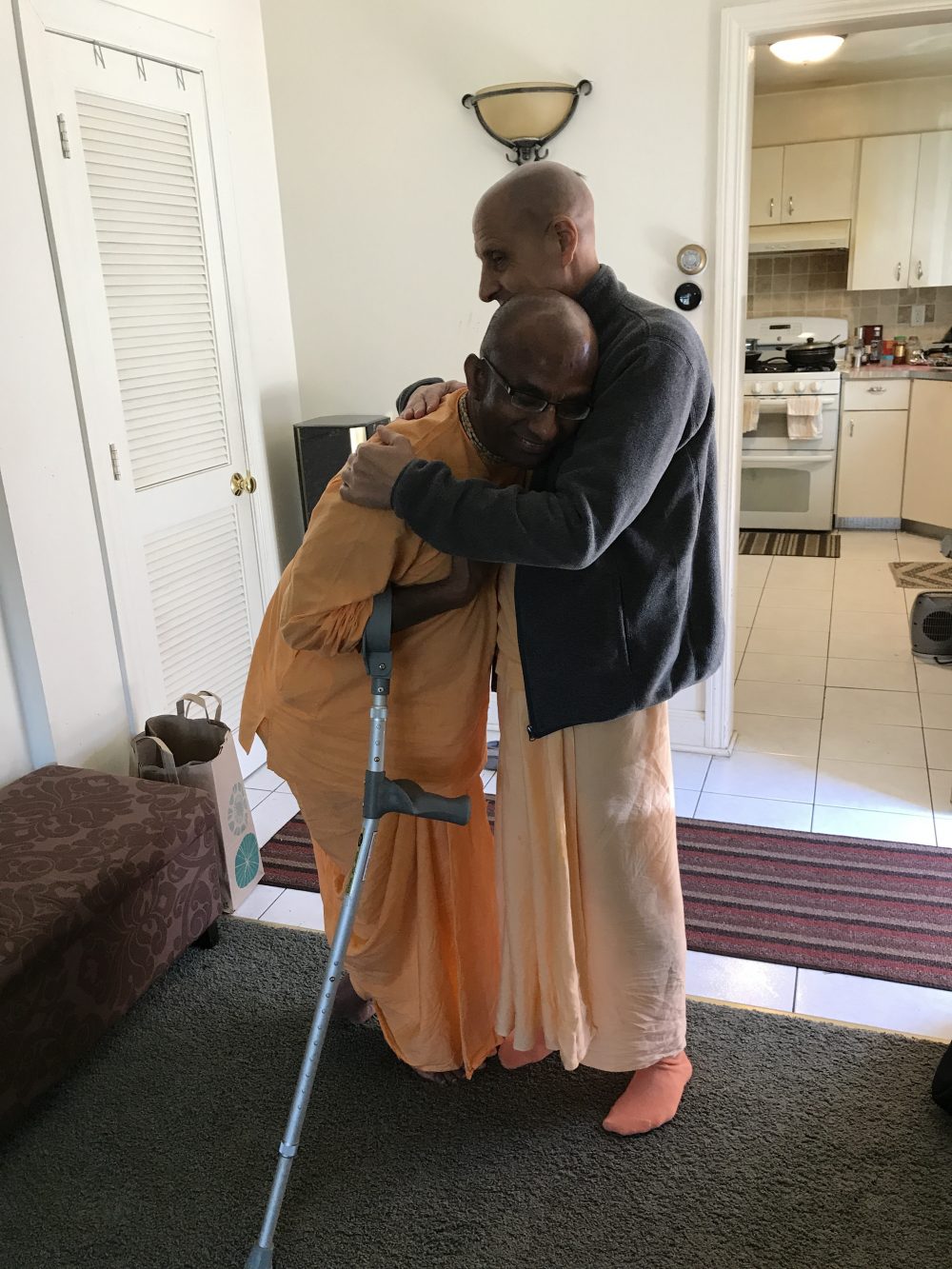 My meeting with my Guru Maharaj, HH Radhanath Maharaj, was by far the most memorable meeting for me. I met Maharaja for over three hours in Chicago at the house of Balaram P, which was the house where Maharaj stayed in his childhood and youth. There, Maharaj lives in the same basement where he spent much of his teenage and youth and deliberated life’s big questions – deliberations that prompted him to embark on the world-spanning and death-defying search for truth which he has described in his memoir “The Journey Home.” Though the basement has been substantially renovated and spiritualized, I could sense it as an arena where much deep contemplation had been done and was still being done.

Maharaj lives there without any of the trappings of guruship. In fact, he said that Chicago is the only place in the world where he has the privilege of driving his own car. And after our meeting, when Maharaj left to meet his father, I saw him get into a car, steer it around and drive it himself – a sight I had never seen before.

Balaram P told me of an incident that revealed poignantly Maharaj’s unassuming mood there. One night, Maharaj came out of the basement, coughing severely. He asked Balaram P whether they had a vaporizer. Since they had already used the one which they had, he told Maharaj that he would just go to a shop and get one. When Maharaj asked what was wrong with the one that was there, he said that they had already used it. Maharaj grabbed him by the shoulder and told him, “Just let me be a normal person. If you treat me as someone special, I will leave right now.” His declaration was revealing – it reflected an attitude opposite to the attitude of most people who would say, or at least feel even if they didn’t verbalize the feeling: “If you don’t treat me as someone special, I will leave.”

When I was told that I was going to have lunch with Maharaj, I was apprehensive, thinking that I would prefer to have my lunch later. But when I was told that that was the norm followed by all visitors including my senior godbrothers such as Govinda P and Gauranga P, I agreed, though not without nervousness.

Before the lunch, during my three-hour meeting with Maharaj, I gave a brief report of my programs at various places. He was pleased with my programs especially for Western audiences and even more so with my program at Bhakti Center. When we discussed about strategies for effective Western outreach, I mentioned that I had found the topic of the mind accessible and appealing to Westerners. Maharaj agreed and appreciated, saying that Buddhism had become big by focusing on mindfulness.

Explaining his strategy for Western outreach, he said that the Journey Home had positioned him as a bhakti seeker and thereafter Journey Within has positioned him as a bhakti teacher. Westerners are into yoga and are open to bhakti, but they have very little idea of bhakti philosophy – they conceive of bhakti primarily as singing spiritual songs. Journey Within was meant to make give them an accessible understanding of bhakti philosophy. When I asked about his future writing projects, he said that his publisher has suggested two books: The Spiritual Environmentalist, which can build intellectually on the practical work done at the Govardhan Eco-Village, and The Teachings of Lord Chaitanya, which can make the special love legacy of the Golden Avatara better-known in the Western world.

Zeroing in on the essence of any strategy for Western outreach, Maharaj told me that we need to learn to be more relevant and to shed the image of being sectarian. The Bhakti Center is his attempt to establish a forum customized for the needs of Westerners.

Knowing that I often address controversial questions, Maharaj spent nearly an hour in a mock QA session. He told me to ask him tough questions and he answered, and then I asked him questions about his answers, trying to understand why he had taken the answer in a particular direction and not another. I was astounded and delighted to see Maharaj in this role – as an expert answerer of questions, addressing tough issues logically, sensitively and faithfully. Seeing his dialectic dexterity was an inspiring revelation; it was like a foot-soldier discovering that his commander was super-expert in a weapon that the commander didn’t often wield.

Towards the conclusion of our meeting, Maharaj encouraged me to expand my outreach in the US, quoting Bhaktisiddhanta Sarawati Thakura: where there is greater need, greater mercy awaits.