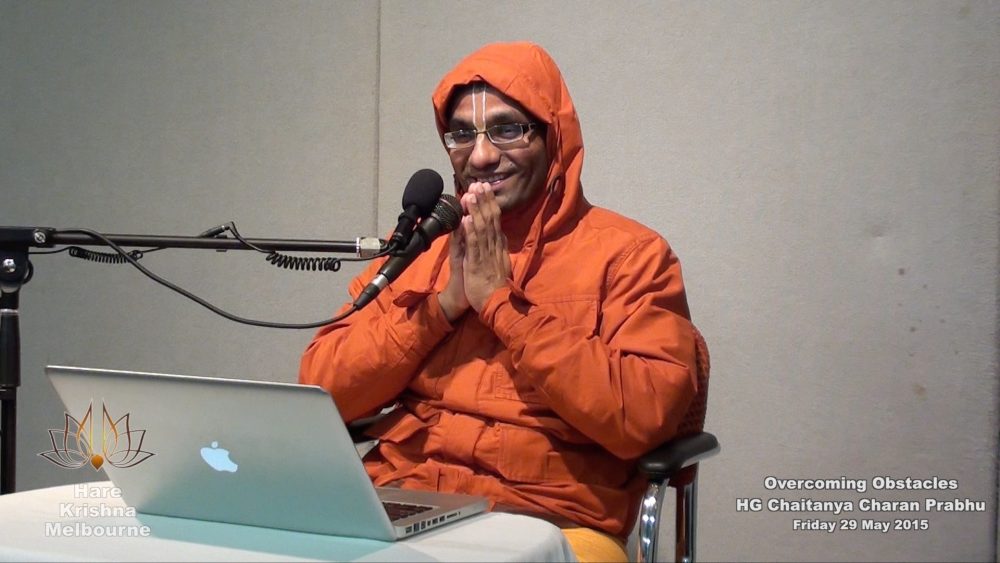 “Missing? Misplaced? Stolen!” I felt the blood rush to my head as I realized with horror that someone had sneaked into my room and taken off with my laptop.

It was 3.45 am at Port of Spain, Trinidad and Tobago. I was at the guestroom of the ISKCON temple, waiting for the ride that would take me to the airport for my flight to Panama. Shanta Vigraha P, the devotee who had coordinated my visit there and who was to drive me to the airport, had been slightly delayed. Meanwhile, I had thought of using the restroom, which was in an adjacent room. Before going there, I had locked the door of the guestroom. But then I went back to open that door slightly, thinking that as the atmosphere outside was hot and mosquito-ridden, Shanta Vigraha P would be more comfortable inside the guestroom than outside. When I returned a few minutes later, he had still not reached, but apparently someone had come in and stolen my MacBook Air laptop.

As the reality that I had been robbed sank into me, I felt first numbed and then infuriated. I rushed out, but, as expected, no one was there. The temple passageway was deserted. I called Shanta Vigraha P and told him about the theft. He too was shocked and assured me that he would reach in a few minutes.

The outer theft and the inner tirade

I was beating myself up mentally, at my stupidity in keeping the door open. When things go wrong, anger is natural. Amidst such anger, we often seek some channel for expressing that anger by directing it to whoever we can blame for things going wrong. But when we ourselves are to blame, the anger that gets concentrated on ourselves can be stultifying and paralyzing.

In my pre-devotional days, a major problem I faced was self-hatred. I used to be angry with myself most of the time for not being the kind of person I wanted to be. Self-acceptance and the ensuing freedom from self-flagellation had been one of the unexpected benefits of practicing bhakti. Gita wisdom had helped me understand that Krishna accepted me the way I was. Despite my flaws and follies, he didn’t abandon me; he always remained in my heart, trying to guide me to become better. Undoubtedly, Krishna wanted me to improve, but he still accepted me as I was. Meditating on his acceptance of me had helped me accept myself, and that self-acceptance had freed my mental energy to work on self-improvement.

Despite this self-acceptance, traces of that old weakness of self-hatred remain and resurface intermittently. After the theft of my laptop, I found myself being targeted by my mind’s full-fledged attack: “Why did you have to be so dumb as to keep that door open?” This question was pounding inside me, as if on an auto-loop; and with each iteration of the loop, the volume of the question was rising.

Meanwhile, Shanta Vigraha P reached the temple and enquired about the laptop. In a few minutes, he came to me and informed that no one in the temple had seen anyone with the laptop, but at around one am, a stranger had been seen loitering about in the kitchen.

I asked him, “Should I postpone my flight so that we can register a complaint with the police?” He replied, “Going to the police won’t help much because the police don’t even have a proper fingerprint database of all the citizens – they aren’t all that organized. Trinidad is a third-world country.”

Exasperated, I wondered if there was anything at all that I could do. Then, I remembered that Apple had some facility to lock stolen devices. I googled on my phone and found the necessary information. But by this time, I had reached the airport and had to start the check-in procedure. I called up Mumbai, India, and arranged with the devotee who helps me with all things IT, Vraja Kirti P, to have the laptop locked through the online settings.

Whenever I travel, I fall back on my daily writing because of the many classes and meetings. So, whenever I fly from one place to another, I try to catch up on the writing. However, now being without the laptop, I confronted the situation of having no tangible engagement while my mind was busily engaged in beating me up internally. Of course, on this day, I had most of my rounds remaining. I felt I was in no condition to focus on the holy name with my mind in full attack mode. But then as I started chanting, it struck me that if ever I needed a weapon to counter-attack the mind, I needed it now – and the holy name was a potent weapon. The next ninety minutes of chanting was among the most intense of my life with my mind trying to beat me and I trying to beat it with the holy name. After I completed my chanting, I felt exhausted, but also enlivened – I realized that had it not been for the holy name, the mind’s relentless attack would have left me internally bruised and battered. Through the battle to focus on the holy name, I got some experience of Gita 18.37: that which tastes like poison in the beginning tastes like nectar in the end.

Aid to shelter or alternative shelter?

While seeing me off at Port of Spain, Shanta Vigraha P had been very apologetic about the theft of my laptop. HH Guru Prasad Maharaj had coincidentally been staying in Trinidad when I visited there and he had freely given his association over lunch on the three days of my visit. After my flight, when I landed in Panama, I found that Maharaj had emailed me with an apology for the theft. I felt embarrassed on reading his apology. I wrote back with the same reply that I had given Shanta Vigraha P: the theft was not their fault – it was my fault that I had kept the door open.

Still, I had my defense, which I didn’t verbalize as I didn’t want to pile on their distress. The guestroom where I had been staying was on the first floor, way inside the temple premises. To reach it, one had to come up through a set of narrow stairs and then walk through an alley that had rooms of resident devotees all around. So, I had thought that no one could sneak all the way till there without being noticed. Unfortunately, my thinking had been mistaken, as experience had taught me painfully.

When I landed in Panama, my host there, Shyama Chandra P, offered me their family laptop – fortunately, they too use Apple computers, and his family was going to Trinidad for the upcoming Rath Yatra.

I was still dismayed at the robbery. After my bead-bag, my laptop is the single most important possession. A devotee who stayed with me for some time had commented, “You live at the lotus feet of your laptop.” Ouch! That jab hurt, all the more so because I couldn’t deny the truth in it. I knew that I was attached to my laptop. Still, I had justified my attachment, saying that the laptop was essential, even indispensable, for my services. On days when I don’t travel or give classes, I use the laptop for anywhere between twelve to sixteen hours, reading, noting, hearing, writing, emailing, journaling and recording audios and videos. Even on days when I travel or give classes, I use the laptop for preparing and recording my classes.

But now with the theft of my laptop, my moment of truth had arrived. When something vital for our service is taken away, we can become disheartened, questioning, “Why is Krishna letting my service to him become more difficult than necessary?” That was my initial reaction too. Thankfully, after some time, my thoughts went to the incident from the Mahabharata that often inspires me: Draupadi’s predicament in the Kuru assembly.

She had five husbands, who were all exalted devotees and powerful warriors. As a faithful wife, she would naturally have expected to be protected by her husbands.

But when her husbands remained silent, she was distraught and could have become devastated. However, her subsequent actions reveal the depth of her devotion.

This reflection brought me a sublime calm, as I intuited a constructive purpose amidst the robbery. My laptop might have gradually changed from become an aid to the shelter of Krishna to an alternative shelter. Such is the insidious nature of illusion – the very thing that takes us towards Krishna can take us away from him. I prayed to Krishna, begging for his shelter, whether I had the laptop or not.

Thereafter, when I started working on Shyama Chandra P’s laptop, I soon realized that I didn’t have that much of an issue working with a new laptop. I wasn’t overly concerned about which laptop I was working on – I just needed a laptop to work on.

While in Panama, I decided to get another laptop and ordered a refurbished MacBook Pro online. After my programs in Panama, I flew to Central New Jersey, where my host and US tour organizer, Devakinandan P, offered me his Surface book Pro for using. Though it was a Windows machine, I found it not too inconvenient to use. On the day when my new laptop arrived, I got a brief message from Guru Prasad Maharaj informing me that my stolen laptop had been recovered.

Surprised and intrigued, I called him up and came to know that a devotee had been offered a Mac for sale by someone. That devotee, having been alerted about the theft of my Mac, immediately checked the piece offered for sale. On noticing that it had my name on the login id, he immediately agreed to purchase it from him.

Possibly, the thief had expected that we devotees wouldn’t escalate matters and had planned all along to sell the laptop back to us. His mentality was something similar to that seen in thieves-markets. In such markets, vendors stock stolen objects bought from thieves. People who have been robbed can often get their stolen possession back from such vendors. Of course, they have to pay to get it back, but at least they can get it back, and get it for less than what they would have to shell out for a replacement.

Shipping the laptop from Trinidad to me took time. It reached me during my last days in London, where I had gone from Central New Jersey. When I finally got the laptop, curiously, I didn’t feel anything at all – no joy or even relief. I just turned it on, opened my favorite picture of the Deities altar in it, and offered my gratitude to Krishna.

Within a few minutes, I started typing a new article on it. Soon, I lost awareness of which laptop I was working on – except, of course, feeling the peculiar comfort of typing on a keyboard whose keys had become faded due to prolonged use.

More important than the recovery of my laptop, I had recovered something much more valuable – the reminder and the realization that Krishna alone was my ultimate shelter. In one of his celebrated songs, Bhaktivinoda Thakura says that whatever he has, he offers to Krishna. He gives an indicative list of most people’s cherished possessions – body, mind, home. With a smile, I thought that I, serving in today’s digital age, needed to add one more item to that list: my laptop.

I pray that I can always be engaged in Krishna’s service with whatever facilities he sees fit to provide, and without them too, if that’s what he sees fit.