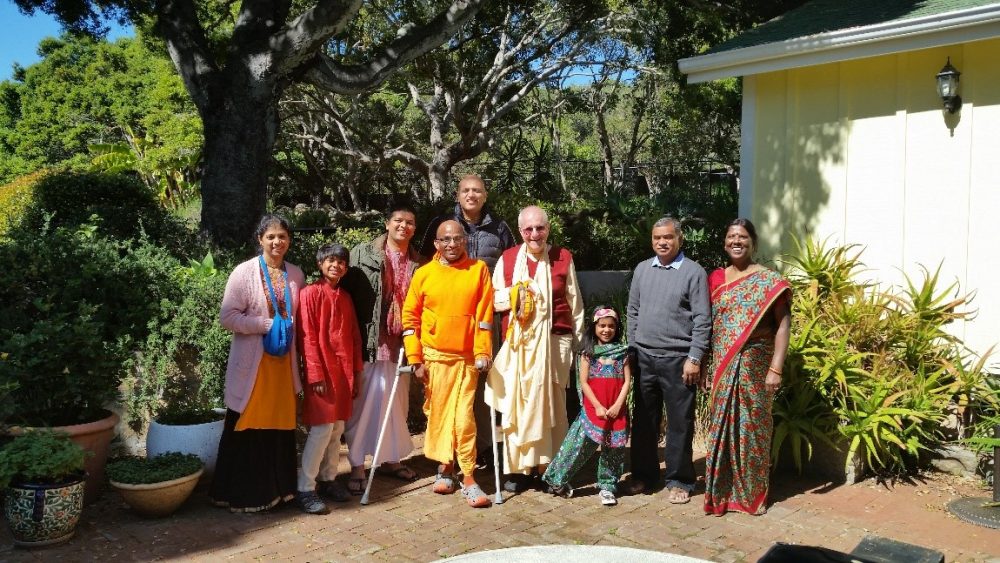 During my travels, I also got the association of many senior devotees who very kindly gave several hours of their time to discuss our philosophy and its practice. One recurrent theme was the challenge of presenting the personal philosophy of bhakti from within what seems like a highly institutionalized religion. Another theme was the strategies for making our message relevant to a highly individualistic audience with post-modern intellectual orientations. Among the devotees whose association I found inspiring were Brahma Tirtha P, a pioneer of mediation in ISKCON; Garuda P, scholar-author on Bhagavad-gita, Bhagavatam and the Bhakti-sutras; Bhakti Marga Maharaj, celebrated as the walking monk for his walking for spiritual awareness across the entire of Canada from one coast to the other; Guru Prasad Maharaj whom I met for the first time in Trinidad; Krishna Dharma P, the author of acclaimed retellings of the Mahabharata and the Ramayana; Srutidharma P, the temple president of the Bhaktivedanta Manor, one of the most successful temples in the Western world; and Tukaram P, a brilliant intellectual and Laguna Beach Temple President.

Along with these illuminating associations, the two that stand out the most for me are of HH Giriraja Maharaja and HH Radhanatha Maharaja.

H H Giriraja Maharaj has been very kind to me in generously giving several hours of his time during each of my US visits. This year too, we spend nearly an entire day together at his place in Carpentaria, California. As I have served him as an editor, we naturally talked about his upcoming book on the history of the Juhu project which Srila Prabupada had asked him to write. He told me that his writing has gained substantial momentum and he is more than half way through. We discussed the challenges of balancing historical accuracy (reporting the facts as they are), dramatic intensity (writing to attract and retain the attention of readers) and interpersonal sensitivity (portraying properly devotees who had some difficulties then but now are in good standing).

When I asked Maharaj about the cultural conflicts going on in our movement and the concomitant bitter criticism of Vaishnavas, he said that he had discussed this issue with Tamal Krishna Maharaja, who had explained that such conflicts happen in every religion. And they happen because people are so emotionally invested in their beliefs and practices. They feel that if they get this thing right, their liberation is guaranteed; and if they get it wrong, their damnation is guaranteed. Because they feel that so much is at stake, they often deem as inviolable principles things that others see as adjustable details. Failing to appreciate others’ perspectives, they launch ad hominem attacks on those whom they perceive as threats to the tradition. I found this explanation the most intellectually illuminating and emotionally satisfying explanation I have heard till now.

Ishvara Gauranga P and Sriji Priya Mataji had driven me from Los Angeles to Carpenteria. After my meeting with Maharaj, Sriji Priya Mataji showed Maharaj her Gaur-Nitai Deities, Maharaj appreciated their beauty. Then with endearing reciprocity, he said to her, “As you have shown your Deities to me, I will show my Deities to you.” Although it was already 3 pm, way past Maharaj’s lunch time, he took us all to his Deity room which was filled with many Deities and then explained for more than half an hour the remarkable stories behind those Deities.