Temptation leans on the doorbell 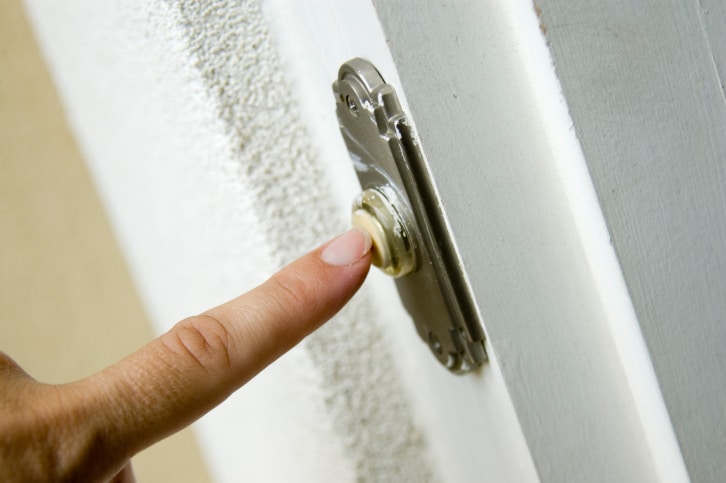 Suppose we are busy working in our house. If someone knocks on the door, and knocks softly, we may not hear them, especially if we are not expecting anyone. But if that person keeps knocking and knocking, we may feel as if we have no alternative except to open the door.

If we consider our consciousness to be like a house, then various stimuli from the outer world are like visitors that knock on the door of our consciousness. When opportunity knocks, it knocks softly. So, we need to be alert enough to notice and grab it.

Whereas we need to be alert to notice when opportunity knocks, we need another kind of resourcefulness when temptation knocks. If a visitor leaned on the doorbell, it would ring on and on and on, leaving us with no option but to open the door. Temptation is such an insistent visitor. When it appears in our consciousness, it just keeps propositioning us repeatedly and relentlessly. Over time, its siren call consumes our consciousness so completely that we feel as if we have to put everything else aside and just give in to it.

How does temptation ring the doorbell incessantly? By appearing irresistible. Initially, temptation allures us with the promise of pleasure that seems immense and immediate and irresistible. However, once we indulge in it a few times, then the desire becomes increasingly forceful, goading us towards indulgence. Being goaded, we indulge not so much because the pleasure is so irresistible, but because the torment of not indulging is so unbearable. Thus, the incessant and loud ringing of the bell of our consciousness by temptation manifests initially as the promise of irresistible pleasure and eventually as the misery of intolerable torment. Either way, we feel driven to open the door just to silence the bell. But as soon as we open the door, temptation barges into our consciousness and takes it hostage, as the Bhagavad-gita (02.44) warns. With our consciousness thus captivated, temptation impels us into self-defeating actions that cause tribulation and degradation.

To turn our attention away from temptation when it allures us, we need to have ready at hand activities that can engage and absorb us. We will readily have such activities if we have cultivated for our life some higher purpose, a purpose that brings out our higher, nobler, purer side. Gita wisdom explains that the highest purpose is spiritual purpose – the purpose of lovingly harmonizing our spiritual core with the supreme spiritual reality. This supreme reality manifests as the all-attractive, all-pure, all-powerful supreme, Krishna. Thinking about him, engaging in his service and redefining our life as an offering of loving service to him brings sublime, supreme fulfillment. And we can access this fulfillment by practicing bhakti-yoga, which trains our consciousness to connect with him. To the extent our consciousness becomes thus devotionally enriched, to that extent we can pull our attention away from temptation without inordinate difficulty.

And just like an unwanted visitor goes away when their repeated ringing elicits no response, so too does temptation go away when we don’t respond to it.

Posted In
Wisdom on Wisdom (WOW)
Tags
About The Author

Bhavin Kataria
You might also like
Wisdom on Wisdom (WOW)
MORE
From possessions that dispossess to the possession that delivers
Seeing ourselves clearly through others’ eyes
Everything is a miracle
Be open-minded, not empty-minded
It is never too late
Activism is our rent for living on the earth
Comments
Leave a response