1944: Began Back to Godhead magazine: 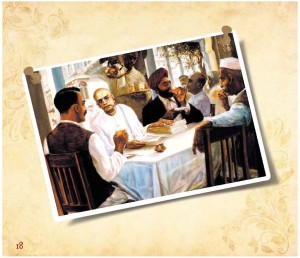 While the world was limping towards the end of the worst war in recent history, World War II, and while Kolkata was still threatened by Japanese bombardment, Abhay felt inspired to address the spiritual bankruptcy that underlay the world’s numerous problems. To make spiritual wisdom accessible to people, he started a magazine called Back to Godhead. Its name conveyed its mission: to re-harmonize human consciousness with the supreme source of all consciousness. He singlehandedly typed, proofread, published and distributed the magazine, approaching people on the hot streets of tropical India. Once, a stray cow knocked him down. Another time, he fell unconscious on the streets due to sunstroke and exhaustion. Still, he never wavered in his determination to keep publishing and distributing the message of spiritual love. The magazine he started continues even today in over a dozen global languages with thousands upon thousands of copies distributed worldwide.