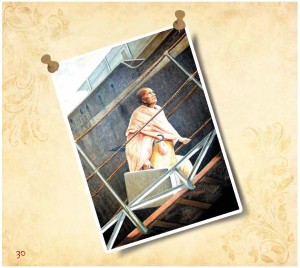 A C Bhaktivedanta Swami’s attempts to share spirituality in India had got lukewarm response, primarily because most Indians were enamored with Western notions of progress. Being both a realist and a visionary, he recognized that Indians would take their spiritual legacy much more seriously if they saw Westerners taking it seriously. So he resolved to go for sharing spirituality to the West, specifically to America, which had replaced Britain as the Western superpower after World War II.

With the first canto of the Srimad Bhagavatam translated, he felt equipped – he saw the message as the actual illuminator and saw himself as the humble conveyor of that message. Being a mendicant with no money, he had to depend on the support of well-wishers for financing his US trip. One well-wisher arranged for his son who was based in America to act as the sponsor for the visa. But financing the travel proved to be much more difficult. After being turned down by many sponsors, he had to sit for hours on the steps outside the office of a potential sponsor to get an appointment. Only after earnest persuasion during the meeting could he secure free passage on an America-bound cargo ship.

Still, when he eventually boarded the ship from Kolkata, he had with him only forty rupees – worth just a few hours of subsistence in America. Just as his financial assets were insignificant, so too was his departure inconspicuous – only a handful of acquaintances came to see him off. Yet his departure was far from inconsequential. The ship’s name Jaladuta (the water-messenger) would turn out to be symbolic and prophetic: it was carrying a transcendental envoy whose message would attract thousands to India and its treasure of spiritual love.