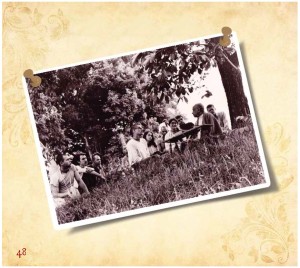 Srila Prabhupada repeatedly stressed simple living and high thinking as the most conducive lifestyle for cultivating spiritual love. To demonstrate this, he inspired and guided his followers to establish self-sufficient communities that featured God-centered eco-friendly living. When some of his dedicated followers started developing such a community New Vrindavan, West Virginia, he stayed with them for months, demonstrating the simple spiritual lifestyle that he taught in his books. This was the lifestyle that devotees had lived for millennia in India, that Krishna himself had demonstrated during his stay in Vrindavan. His disciples were amazed to see the breadth of his knowledge – it extended from the topmost transcendental subjects about esoteric spiritual love to the down-to-earth details of fashioning a cart that wouldn’t sink in the marshy terrain.

New Vrindavan has now become a Western place of pilgrimage for devotees and seekers. It features a magnificent Prabhupada Palace of Gold that when inaugurated was called by the New York Times the “Taj Mahal of the West.”

Over the decades, many similar communities have been developed in various parts of the world. They serve as not just serene spiritual sanctuaries but also as crucibles of ecological research – they demonstrate prosperity through living in harmony with nature as a viable, even preferable, alternative to prosperity by exploiting nature.