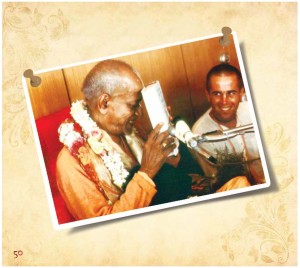 The Bhagavad-gita is among the best known philosophical classics from the Indian wisdom-tradition. Though many commentaries had been written on it, few if any focused on the transformational power of love that is its underlying, unifying essence. Srila Prabhupada brought that essence out in his commentary titled Bhagavad Gita As It Is. He finished writing this commentary in America in 1967 and wanted to publish it there.

But as he was relatively unknown in America and as his book was seen as the religious book of a minority religion that would not attract many readers, no publisher was forthcoming. Nonetheless, through a miraculous series of events, the respected publishing house, MacMillan, published his commentary, albeit in an abridged edition. Exceeding expectations, the commentary was widely appreciated and soon re-printed repeatedly. Eventually, Prabhupada published the unabridged edition through his own publishing house.

Over the last five decades, his Gita commentary has become the world’s most widely read English commentary. Millions of copies have been distributed all over the world in over sixty languages.