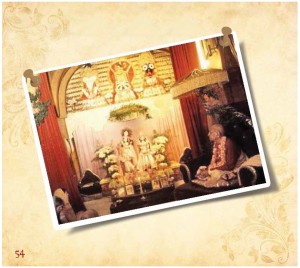 Srila Prabhupada had sent three couples to England to share the message of spiritual love there. After an initial period of intense struggle – struggle that they weathered by the strength of Srila Prabhupada’s encouraging and guiding letters – they got a major breakthrough when they met the “spiritual” Beatle, George Harrison. The legendary musician had already heard an album of Srila Prabhupada’s singing the Hare Krishna mantra – and had found it spiritually fascinating. With his assistance, the devotees moved forward much faster in setting up an ISKCON center in London. At their invitation, Srila Prabhupada came to London and installed Radha-Krishna deities.

Five decades ago, Srila Prabhupada had been an Indian political activist against English colonial rule. Now, he was in London as a spiritual teacher, initiating as his disciples descendants of those colonist English, and establishing in London a temple that was a part of the same culture that the English had subjugated for two centuries. Geopolitical realities had changed, but the sovereignty of the one God whom different religions addressed by different names remained unchanged. Enshrining this eternal reality in a transcendentally innovative neologism, Srila Prabhupada named the Deities Radha-Londonishvara, thus conveying God’s sovereignty over everything, including London.