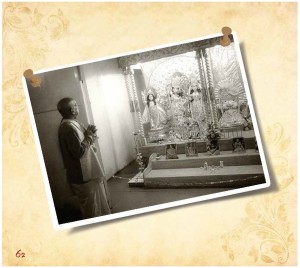 When Srila Prabhupada came to Kolkata with his Western disciples, his pandal programs were attended by twenty to thirty thousand people, with some programs being among the biggest the city had ever seen. Soon, Kolkata warmed up to the achievements of its illustrious son.

But not everyone was pleased. Anti-social elements threatened him with “Fly or Die” notes. Unfazed, he continued his outreach. When one evening, some rowdy youths came to disrupt the program, he fearlessly led from the front and diffused the volatile situation by his saintliness and his presence of mind.

It was in Kolkata that Srila Prabhupada also established ISKCON’s first temple in the India. While growing up as a child there, he had worshiped the Deities of Radha-Govinda in a neighborhood temple – and now, expressing his gratitude and his resolve to expand the bhakti heritage, he installed Radha-Govinda Deities in that same city.