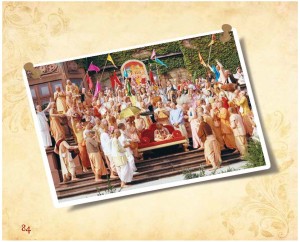 Though he left the world in 1977, he left for the world an enduring legacy that continues to spiritually enrich millions even today.

Among his most significant gifts are his books, temples and followers. When he was still an unknown Swami taking walks on the streets of New York, he could envision scores of temples and thousands of devotees – and he declared that time alone separated him from them. His vision was astonishingly prophetic. In little over a decade after he took his first step outside India, he had circumnavigated the globe fourteen times, built hundred and eight temples, and inspired millions to take up the path of spiritual love.

From 1965 to 1977, he wrote eighty books, all based on India’s spiritual wisdom-literature. That worked out to be about 7 books every year, or more than one book every two months continuously for twelve years. Such was his literary proficiency that the Encyclopedia Britannica Book of the Year in 1976 noted, “[ Bhaktivedanta Swami] astonished academic and literary communities worldwide by writing and publishing fifty-two books on the ancient Vedic culture . . . in the period from October 1968 to November 1975.”

Similar appreciation had been expressed by the CNN in an article on 16th May, 2010, which deemed him one of the ten most successful people in the world who launched their careers after 50.

Appreciating the magnitude and significance of his legacy, the renowned scholar on Indian history and culture, A L Basham, author of The Wonder that was India, wrote, “The Hare Krishna movement arose out of next to nothing in less than twenty years and has become known all over the West. This is an important fact in the history of the Western world.”