A momentous step for humanity: 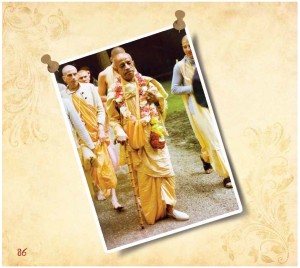 Though the first forty years of his outreach efforts in India met with only a lukewarm response, Srila Prabhupada was not one to take no for an answer. With an indefatigable determination that stemmed from his transcendental love for Krishna, he pressed on and decided to go to America, despite being in his late sixties, despite having no reliable contacts, despite having no money worth mentioning and despite having no organizational backing. Given these crippling disadvantages, his stepping on the Jaladuta to embark on an outreach mission to America could well be seen as one of the most courageous steps in human history. What was one small step for a man was to become a giant leap for humanity in its spiritual evolution – an evolution that we all have an opportunity to participate in and carry forward.