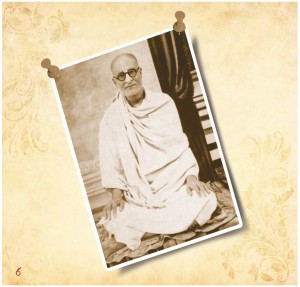 Abhay had grown into a well-educated, articulate young man. Being a concerned citizen, he had joined Gandhiji’s non-cooperation movement that protested against the exploitative policies of the British government. To express non-cooperation, he had boycotted the trendy clothes manufactured in the mills of Manchester and had started wearing clothes made of the local material, khadi – a dress-choice that was a strong political statement. Not only that, he had refused to accept the graduation degree that he had earned after years of diligent study at the respected Scottish Church College. Yet a momentous meeting in 1922 spiritualized his zeal, transforming him from a political activist to a spiritual activist: That meeting was with the saint who would later become Abhay’s spiritual master: Bhaktisiddhanta Saraswati Thakura, the founder of the Gaudiya Math, a spiritual organization dedicated to sharing the message of spiritual love. Abhay had seen many sadhus living like parasites on society, so he had been reluctant to meet what he thought would be one more such sadhu. Only at a friend’s unrelenting insistence had he come. However, what was to be a ritual offering of respects to a religious teacher became a confrontational discussion about the best way to contribute to India and the world. The saint saw the spiritual potential in the young man and asked him, within moments of their first meeting, to share the bhakti tradition’s message of love with the world. Astonished, Abhay countered that India needed political independence first before its spiritual message would have respectability. The master responded that the greatest need of the world was the raising of human consciousness through spiritual love – without it, no other solution would offer any lasting relief. The project of raising human consciousness was so urgent and so universal that it cut across all worldly considerations, including those of political independence or its absence. As they discussed and debated, the saint impressed on the seeker the primacy of pure consciousness as the foundation for all individual and social change. Though a forceful debater, Abhay accepted defeat with disarming grace, resolving that the one who had mastered him would become his spiritual master.