1939: Is bestowed the title Bhaktivedanta: 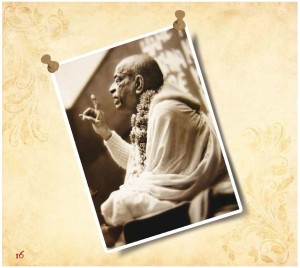 Abhay had been writing articles and poems in the magazines run by his master’s mission – and the insights in his writings had so pleased the master that he had declared, “Whatever Abhay Charan writes, publish it.” After the master’s departure, Abhay continued and intensified his writing. Appreciating his scholarship and zeal, his godbrothers from the Gaudiya Math gave him the title “Bhaktivedanta” The title meant that love for the divine (bhakti) is the conclusion (anta) of all knowledge (veda) –a truth that Abhay had consistently and convincingly communicated through his writings, and would continue to do so.