1953: Initiated his first disciple and started the League of Devotees – both in Jhansi: 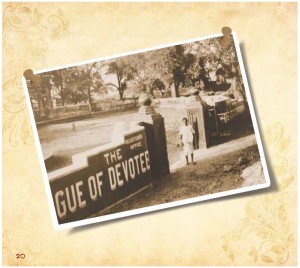 Abhay was now less a pharmaceutical businessman and more a traveling spiritual teacher. And his traveling brought him to Jhansi, where several interested people urged him to make his base. A Sanskrit professor at a local college, Acarya Prabhakar, became his first initiated disciple. His local admirers offered him an unused building, which he decided to make the main office of his outreach mission that he named The League of Devotees. Though the results of his outreach in Jhansi had been modest, he had grand plans for expansion. Unfortunately, a clique involving local politicians and businessmen sabotaged his efforts and compelled him to vacate the premises. Disappointed but undaunted, Abhay returned to the life of a traveling teacher.