1962: Published the Srimad Bhagavatam, Canto One, Volume One: 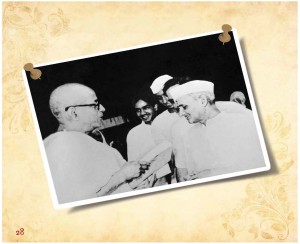 Demonstrating the spiritual saying that a saint hears the voice of God everywhere, A C Bhaktivedanta Swami saw divine guidance in the suggestion of an acquaintance: Write books instead of magazines – books have a much longer shelf life. He envisioned a multi-volume translation-commentary on one of India’s greatest devotional classics: the Srimad Bhagavatam. Also known as the Bhagavata Purana, this most celebrated of all the Puranas is a spiritual masterpiece with thousands of verses spanning across twelve cantos. It had never before been available in English translation-commentary. Working with the same incredible industry that had characterized his magazine publication, he typed, proofread, solicited sponsorship and published the first volume of the series. His work was appreciated by many eminent people including the Prime Minister of India, Lal Bahadur Shastri, who recommended that libraries across the country stock the series.

Over the next two years, he completed the translation-commentary on the first canto in two more volumes before venturing abroad.

During the next decade, despite a demanding traveling schedule, he continued working on this magnum opus till his last breath. Today the 18-volume 10,000 plus page rendition of the Srimad Bhagavatam has been translated into over 40 languages and distributed in millions all over the world.