1965: Darshan of Krishna on Jaladuta: 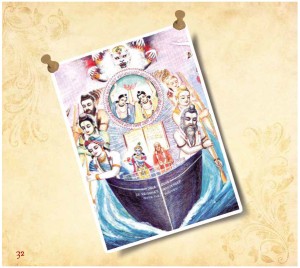 His voyage began ominously. After undergoing bouts of seasickness, he endured two heart attacks on two successive days. And he had to endure them without any medical attention whatsoever, being the lone passenger in a cargo ship with no medical facilities. Fearing that a third successive attack might be fatal, he intensified his prayer to Krishna – and that night instead of a heart attack came the Lord of his heart. Krishna appeared in a mystical vision, offered his blessings and assured that he would personally steer the ship across the ocean and would ensure the success of his devotee’s mission. At the end of their journey, the ship-captain remarked that never before during his forty years of navigation had the Atlantic Ocean been so calm. Prabhupada wrote in his diary that Krishna had taken charge of the ship.