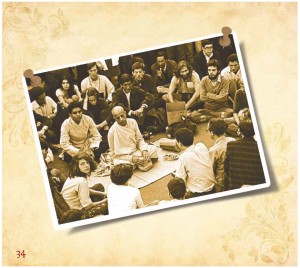 When A C Bhaktivedanta Swami first beheld the American shoreline with its impressive skyscrapers, he saw not material prosperity but spiritual bankruptcy. And he prayed fervently to be used as an instrument of divine compassion, beseeching the Lord to make him dance like a puppet. He had come to America not to enjoy its comforts, but to share the spiritual comfort of God’s love. So, as he initially explored the terrain for its spiritual receptivity, he stayed first with his sponsor in Butler and then with a yoga teacher in New York. But once he found a spiritually promising territory, he plunged deep into it, although it was materially inhospitable. That territory was Lower East Side, New York, where hippies from all over America had settled to pursue their experiment in counterculture.

A C Bhaktivedanta Swami had arrived in America at a turbulent phase in its cultural history – the phase of the counterculture when its youth were rejecting the materialism that was the fuel and the goal of the mainstream culture. Not knowing where to find a satisfactory alternative, many of these well-intentioned but uninformed youth were seeking spirituality through psychedelic drugs. And tragically they were ending up not as spiritualists but as drug-addicts. 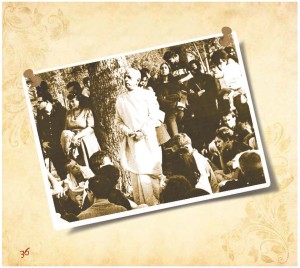 Into this confusion and degradation, where thievery was commonplace, where trigger-happy kids roamed unfettered, where drug-induced babble was seen as spiritual revelation, came A C Bhaktivedanta Swami. A greater cultural mismatch would be difficult to imagine: an elderly, scholarly monk who had never drunk even tea during his life was living amidst college dropouts whose lives centered on sex and drugs. And yet the spiritual music and message he brought united hearts together in divine love, transcending the cultural incompatibility.

Fearlessly and compassionately, the Swami, as he came to be known in America, invited those troubled youths to replace the chemical high of drugs with the spiritual high of the holy names of God. Initially, the invitation seemed to boomerang. The first youth who showed some serious interest and who came to live with the Swami to learn from him turned violent under a drug-induced mania. When he charged to attack the Swami, the elderly teacher had to flee – and found himself homeless in a foreign land.

But his spirit was indomitable – he quickly regrouped and soon relocated to a storefront aptly titled “Matchless Gifts” and reissued his invitation to the hippies, who started coming regularly. Soon, he was conducting programs on three evenings every week. During the programs, he spoke on the Bhagavad-gita and sandwiched his talk between long kirtans. These kirtans featured dancing in tune with the the responsive singing of the maha-mantra: Hare Krishna Hare Krishna Krishna Krishna Hare Hare, Hare Rama Hare Rama Rama Rama Hare Hare. The hippies were into music and they came to love the Swami’s spiritual music.