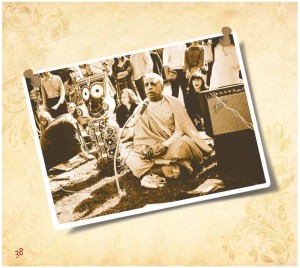 Appreciating the positive response to the storefront kirtans, the Swami decided to take the kirtan to the place where the hippies hung out. He went to a prominent local park, the Tompkins Square Park, and started singing under a tree while some of his followers started dancing. Intrigued, a few onlookers joined till eventually hundreds were singing and dancing in a two-hour jubilant celebration of spiritual love – the first of its kind outside the Indian subcontinent. After that first success, there was no looking back; public kirtans soon became one of the Swami’s principal outreach methods. Today, kirtan processions are a familiar sight on the streets of the world’s major cities and kirtan festivals are celebrated in numerous parts of the world. In fact, kirtan has become such a popular and influential genre in music that there’s an increasing demand to make it a new category for Grammy awards.

The elm tree under which the Swami led the first kirtan still exists in Tompkins Square Park. Called the Hare Krishna tree, it bears a plaque commemorating this historic event.