1971, May: Visited Australia for the first time: 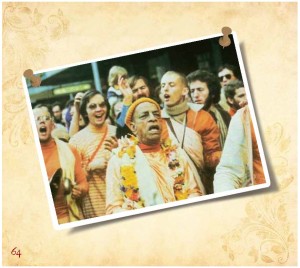 As a part of his vision to share spiritual love with the whole world, Srila Prabhupada had sent his disciples to Australia. They had initially faced suspicion and opposition, even being arrested for dancing on the streets. But gradually their spiritual sincerity shone through and they attracted many interested people. When Srila Prabhupada came to Sydney, Australia, at their invitation, he inspired both followers and visitors by his words and actions.

Knowing that, given his age, he didn’t have much time and wanting to give a strong impetus to the bhakti movement in Australia, he came up with a transcendentally bold move. Though the devotees in Australia were young and not adequately trained, he still installed Radha-Krishna Deities and prayed to their Lordships to guide the novice devotees from within their hearts about how to render devotional service properly.

His faith in the devotee’s sincerity was well-placed, as he saw during his next annual visit. The devotees had learnt proper devotional principles and practices – and were maintaining high standards of Deity Worship, standards that are being continued even now.