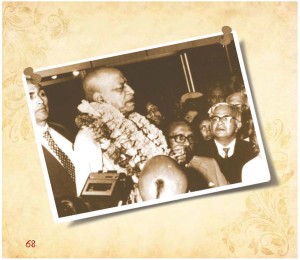 Srila Prabhupada had sent his followers to Africa, but they hadn’t been able to make much headway with the native African population. So they had focused on cultivating the Indian diaspora there. But Srila Prabhupada’s vision was universal – he saw the message of spiritual love not as the property of any particular religion, but as the ultimate destiny of all people. So when he came to Nariobi, he told his followers to perform kirtans in a centrally located Hindu temple and open the doors for everyone. The joyous singing and dancing attracted Africans to enter and join the celebration. As the joy of spiritual love linked them all together, centuries of racial stereotypes and prejudices were swept away in the flood of devotion.

Later, while addressing two thousand students at the University of Nairobi, he urged them to avoid the path of uni-dimensional material development that the West had followed, for it led only to disappointment and frustration, as seen in the hippie culture emerging in the West. Instead, he urged them to give due time to spiritual growth and thus achieve balanced progress.

By his inspiration, the bhakti legacy is going strong in Africa, with the Hare Krishnas being among the most rapidly growing religious groups in Ghana.