1972, Feb 29: Conducted ground-breaking ceremony for a magnificent temple in Mayapur: 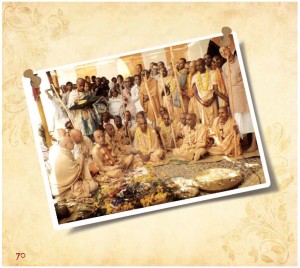 Srila Prabhupada represented and presented a spiritual lineage coming from Lord Chaitanya Mahaprabhu, a medieval saint who had spread the culture of sankirtan throughout India. Lord Chaitanya is revealed in esoteric bhakti texts to be an hidden incarnation of God descended for propagating the yuga-dharma, the recommended spiritual practice for this age: the congregational chanting of the holy names. Since Lord Chaitanya had appeared in Mayapur, Srila Prabhupada desired to establish the spiritual headquarters of his movement in this sacred place. The project that started with a deserted patch of land surrounded by overgrown fields and forests has now become a vibrant community, indeed a spiritual township wherein people from various parts of the world live in devotional harmony. A beautiful temple there attracts millions of pilgrims annually. And  under construction is what will become the biggest Hindu temple in the world with a height of 340 feet, a covered area of 6,750,00 square feet – and a 75-feet domed planetarium theater, the only one of its kind in India.