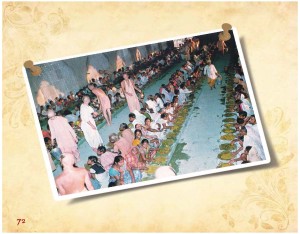 When Srila Prabhupada was in Mayapur in 1974, once he saw local village children struggling with stray animals for scraps of food. Moved to tears, he called his followers and told them that no one should go hungry for ten miles around a temple. That compassionate pronouncement became the rallying call of ISKCON Food for Life, which has gone on to become the world’s biggest vegetarian food relief program. Its activists have distributed food in many of the world’s most destitute areas and in the world’s worst disaster-hit areas. The New York Times (December 12, 1995) stated that Food for Life volunteers in Chechnya were described as having “a reputation like the one Mother Teresa has in Calcutta: it’s not hard finding people to swear they are saints.”