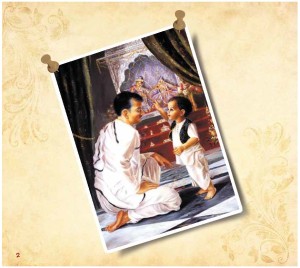 He was born in Kolkata on Sep 1, 1896. The day itself was significant, being the day of Nandotsava, the day when millennia ago Lord Krishna’s father, Nanda Maharaj, celebrated exuberantly the birth of his son, who had been born at midnight the previous day. His appearance on that day was significant too: Just as the day was marked by devotional celebration, he too would bring devotional celebrations to various parts of the world. Named Abhay Charan by his parents Gaur Mohan De and Rajani, he was born in a devout family. One of his earliest childhood memories was waking up to the sound of bells being rung in worship. And he started learning to play mridanga, a kind of drum used in kirtans, in his early childhood when his hands were barely long enough to reach the two sides of the drum. Little did the observers of this gifted child know that he would play the mridanga all over the world – and inspire scores of people from various parts of the world to play it too.