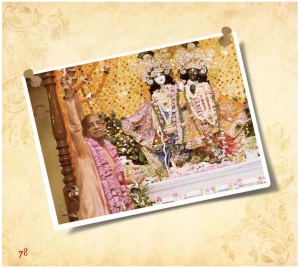 Returning to the place where he had lived and prayed and written, Srila Prabhupada envisioned an elegant temple that would showcase the beauty of Krishna and Vrindavan for the whole world to relish. And in 1975 on Rama Navmi day manifested a marvelous temple, the Krishna-Balarama Mandir. While the temple has Radha-Krishna Deities, as to most temples in Vrindavan, its distinctive feature is that the central altar features Deities of Krishna-Balarama. This special feature reflects the significance of its location: it is situated in the part of Vrindavan where Krishna and Balarama played during their descent to this world.