Why do some people commit horrible crimes without the slightest remorse as if they have no conscience?

Question: Why do some people commit horrible crimes without the slightest remorse? Do they have no conscience?

Answer: Our conscience is like our internal watchdog. It barks and warns us whenever the thief of immorality comes to plunder our integrity. Those who heed the watchdog’s warning drive away the thief; they reject the immoral temptation by activating their intelligence. Others get so allured by the temptation that they beat the dog instead of the thief! They silence the voice of their conscience and delight in immoral pleasures.

The Bhagavad-gita (15.15) explains that the Lord personally resides in our hearts as the Supersoul (Paramatma) to guide us in our life’s journey. Our conscience, when pure, is actually the voice of God guiding from within. When a person knowingly and repeatedly acts contrary to the inner voice, he is telling God by his actions: “I will to do what I want to; I don’t want your guidance.” Due to this adamance and defiance, God withdraws His guidance; the inner voice starts fading till it becomes almost mute. Then that person unhesitatingly does unconscionable acts. 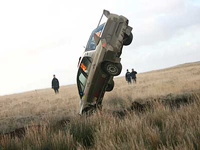 Some examples of people with muted conscience are animal slaughterers, criminal sociopaths, rapists, child abusers and mercenary murderers. Terrorists have not only muted the voice of the true God who loves all His children, but have also imagined a god who hates those whom they hate. Thus, the “god” of the terrorists is a fabrication of their own ego, created to provide a religious rationalization for their irrational malevolence.

We are all free to neglect the inner voice, but we cannot neglect the consequences of that neglect. If a person driving a car on a steep mountainous road breaks the fencing at the side of the road and thinks, “Now I can freely enjoy riding the way I want,” his freedom will simply become a free-fall to destruction. Similar is the plight of those who break the fences that God has created on the road that takes us back to Him. For example, those who break God-given regulations for sexual morality freely fall to various sufferings, with sexually transmitted diseases (STDs) like AIDS, syphilis, gonorrhea being the most obvious among them.

For those of us whose conscience may be somewhat muted, can we raise its volume again? Certainly. God guides us not only internally as the Supersoul, but also externally through guru-sadhu-shastra (spiritual master – saintly teachers – sacred scriptures). When we follow their external guidance, we show God that we do want his internal guidance. He naturally reciprocates by making the voice of conscience louder. Empowered by that inner guidance, we can all gradually become exemplary human beings having the highest moral and spiritual integrity.

Posted In
Articles
Tags
About The Author

You might also like
Articles
MORE
Responding to attacks on devotees in Bangladesh
The Kashmir Files Reflection: Tolerance at the cost of truth destroys both
Prabhupada — the transcendentalist who embodied the best of the traditionalist, the existentialist and the utopianist
How to overcome hypertension, anxiety and depression during the pandemic
While the world slept …
By using the lower case pronoun for Krishna, aren’t you minimizing his position?
5 Comments
Leave a response