Balaram appearance day at the lotus feet of Lord Balarama 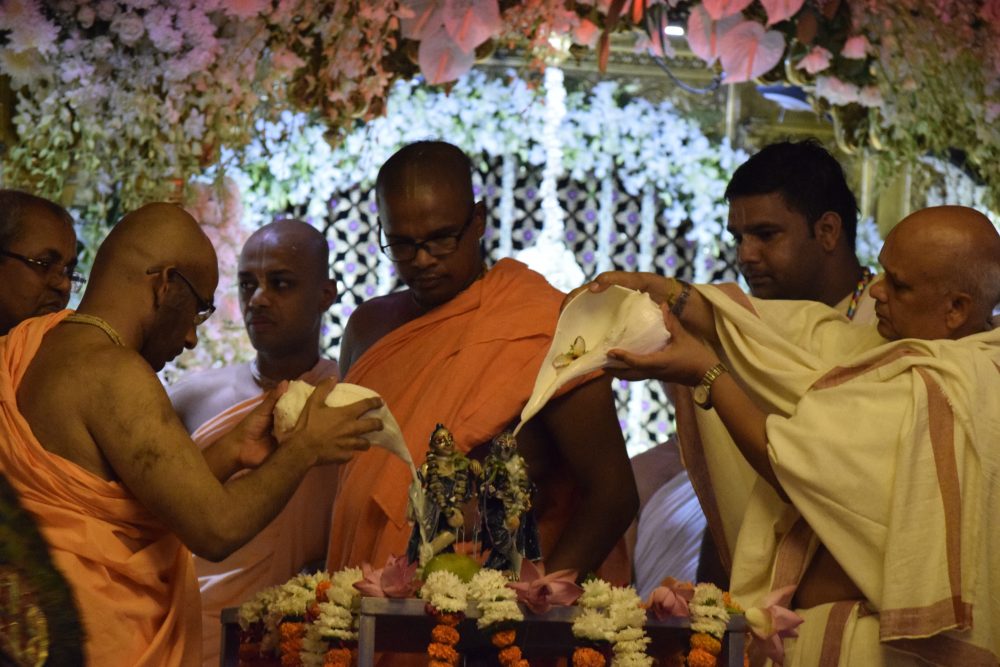 Around the period of Balarama Jayanti, 2017, I went on a North India tour which was as much as a pilgrimage as it was an outreach tour.

Over the last few years, I have travelled more in America than in India. I wanted to correct this imbalance and, more importantly, to visit Vrindavan and seek the blessings of the dhama before embarking on my fourth tour of the US, which incidentally is the first youth-outreach focused tour.

Additionally, Rukmini Krishna Prabhu, the Temple President of Punjabi Bagh temple, had invited me there long ago. When he came to know I was coming, he competently coordinated with the various temples in Delhi for a weekend full of programs.

In Delhi, the highlight for me was the opportunity to speak about Balaramji on his appearance day at a temple where his Deity is present – very few ISKCON temples have Balaram deities. I spoke on how Balarama serves as a link between Krishna and the Vrajavasis, acting as the Lord’s messenger to those feeling separation from him. Similarly, Balarama’s representatives, our spiritual masters, link us with Krishna, helping us make sense and find solace when life goes wrong. I also felt blessed to have the opportunity to do the Abhishek of Krishna-Balarama deities on the occasion of Balarama appearance day.

My overall Delhi-Vrindavan trip was coordinated by Radha-Damodara Prabhu who works at Sopra Steria and organized a program for his colleagues (Tap the power of thoughts, don’t be trapped by them – Hindi). He drove me to and fro from Vrindavan, and we had several good discussions on living with the distance between our principles and our practices, while also working to bridge that distance.

Over the years, I have been somewhat hesitant in speaking to Hindi audiences because I was told that my classes are too intellectual for them, and I struggle to find precise Hindi words for expressing myself. All my reading, writing and thinking of philosophy has been in English. So, whenever I speak in Hindi, I have to act as both a translator and a speaker.

Interestingly however, the feedback of devotees after my Hindi classes in Delhi revealed to me how seeming disadvantages can become advantages. Because I struggle for finding the right words in Hindi, I am forced to speak slowly, thus countering my tendency of speaking too fast that makes my English classes a strain to understand for some. Also, because I don’t know precise Hindi words, my language becomes simpler during my Hindi classes than in my English classes, thus making them more accessible to the audience.

Though exhausting, the engagements in Delhi were exhilarating, all the more so because I could see so many young devotees, both brahmacharis and congregation, hearing enthusiastically and serving vigorously, as was evident from the many temples coming up there. I felt inspired to see how Srila Prabhupada’s stress on focused outreach to youth is bearing rich fruit as many young leaders from the second generation are taking responsibilities in our movement as it prepares for its generational change of guard.