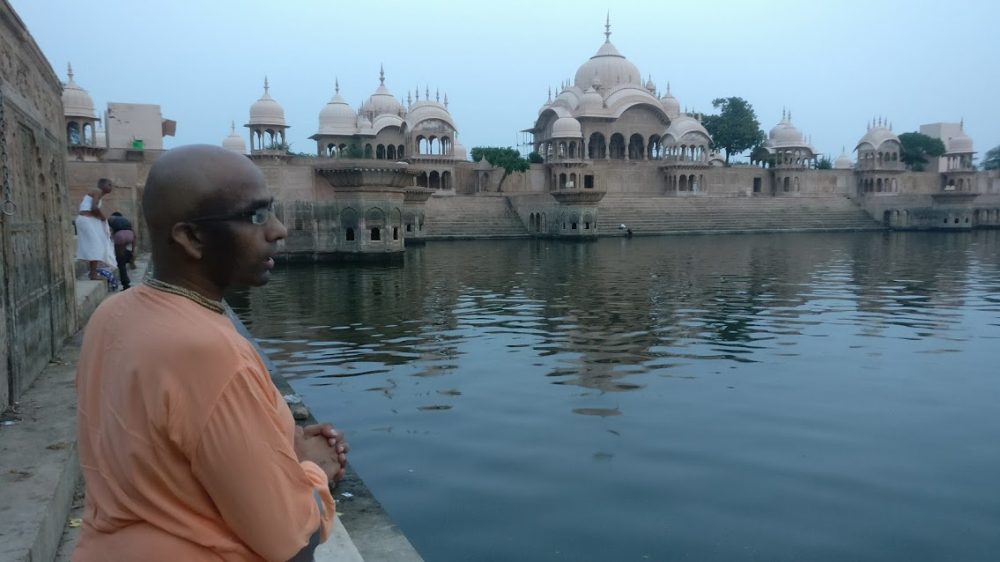 My favorite place in Vrindavan is the Kusum Sarovar. During my recent Vrindavan visit, I savored the beauty of the Sarovar in the early morning hours.

A local caretaker took us inside one of the buildings to have darshan of Vishnu’s lotus feet there. He explained how the Rajput kings who had built the Kusum Sarovar had countered through construction the destruction that had been wrought in Vraja by Mughal invaders.

As I meditated on the architectural beauty of Kusum Sarovar, it struck me that the attack on bhakti nowadays was not so much architectural as it was intellectual. Temples are not being widely destroyed today, but the faith that makes people come to temples is being extensively destroyed. Srila Prabhupada has launched a dual program of both architectural and intellectual rejuvenation. He has inspired the building of many beautiful temples and has also inspired the systematic study of bhakti wisdom that will protect and strengthen the faith that drives people to visit the temples. I spoke these thoughts briefly: Kusum Sarovar meditation – Cherishing the culture rich with spiritual stimuli.

As I beheld the beauty of Kusum Sarovar that is evident to our fallible eyes even today and meditated on the timeless beauty of Vrindavan that is revealed through scriptures, I felt a longing to relish Krishna’s Vraja-lila. Many devotees across the world have told me that as they grow older, they feel inspired to cut down on their worldly engagements and focus more on direct devotional service, maybe even relocate to Vrindavan.

I found myself conflicted while praying for something similar because my present service seems to be keeping me away from directly meditating on Krishna-lila. And as I have started focusing on Western outreach over the last few years, I have needed to read, think, speak and write on basic human applications of spiritual principles because that’s what most people nowadays find relevant – that’s what they need to hear before they will even consider Krishna-lila as anything more than religious mythology.

Of course, there are thousands eager to hear direct Krishna-lila. But far more are the people who need to be made ready to hear about Krishna, and serving them happens to be my primary service.

Thinking how far my consciousness was from direct meditation on Krishna-lila had left me feeling a little devotionally forlorn. But I felt strengthened on visiting another of my favorite places in Vrindavan – Prabhupada’s rooms in Radha-Damodara temple. Though Prabhupada had been there, at the lotus feet of Krishna and the acharyas, he had left Vrindavan to go to New York – and there too, to the Lower East Side, the Mecca of the hippies. Why had he embarked on this perilous journey? Because his devotion was not just to relish Krishna’s sweetness, but to get those stooped in degradation to relish that sweetness. It is because of Srila Prabhupada’s selfless sacrifice that I and millions of souls like me have the opportunity to start relishing Krishna-lila.

As a service to Srila Prabhupada and his followers, I too need to study and share that which serves his mission. Meditating on Prabhupada’s example reminded me forcefully that speaking is first and foremost a service. What we speak on is not as defining as why we speak it. To think that just by speaking directly about Krishna, we will automatically be closer to him is like thinking that just by being in Vrindavan, we will automatically be closer to Krishna. Yes, speaking directly about Krishna-lila is wonderful, as is being in Vrindavan. But what is more important is the consciousness, the attitude, the intent. Bhaktisiddhanta Saraswati Thakura has memorably said: “Don’t try to see Krishna – try to serve him in such a way that he will want to see you.” And a variant of that saying applies to those who are trying to share bhakti in today’s world: “Don’t try to see Krishna by speaking about direct Krishna-lila – try to serve Krishna by speaking about Krishna-shiksha, his teachings that will help people come closer to him; and he will reveal himself as per his sweet plan.”