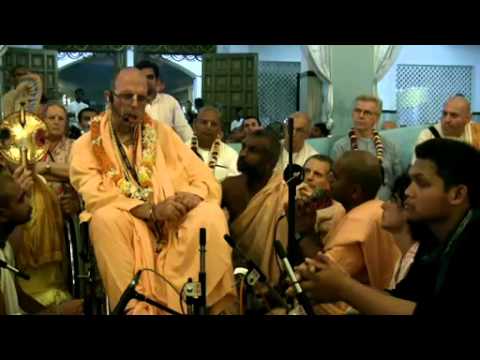 I don’t usually write about events because they don’t attract me as much as concepts. Yet there are some events that impel me to write. The inauguration of the new temple in Pune, the departure of the devotee-mother of two brahmachari brothers who are my close friends and then the departure of their devotee-father are the few events that I have written about.

The sight on a YouTube video of His Holiness Jayapataka Maharaj leading kirtans during the recent kirtan mela in Mayapur was one such event that I couldn’t not write about. The devotional intensity with which he was singing the holy names was heart-rending. Through that youtube video, the spiritual potency of the kirtan could still be felt days later and hundreds of miles away. While the kirtan’s potency was exceptional, what struck me was the sight of Maharaj singing robustly despite his obvious physical difficulties. Those of us who have had serious diseases know that for every visible health challenge, many more are the invisible challenges that need to be combated in the privacy of one’s own mind.

In sports, players who get sidelined due to injury and then return successfully are celebrated for their comebacks. The tennis player Rafael Nadal is called the comeback king of tennis for having returned to the top from a career-threatening injury. His Holiness Jayaptaka Maharaj deserves the title of a comeback emperor.

To survive a devastating stroke of the kind that hardly anyone survives is special. To not just survive, but also walk determinedly the long recovery road to a normal life is even more special. To return not just to a normal life but also to the center of the battlefield as a commander leading thousands of troops is supremely special. That was how I saw Maharaj on that video – as the comeback emperor in Lord Chaitanya’s army, dissipating illusion and distributing ecstasy by releasing the weapon of the holy name with every mantra that he sang. It was clear, painfully clear, that singing each mantra took him much effort. And yet what was even more undeniably clear was that he was relishing divine ecstasy, which was flowing out through him to everyone who was fortunate enough to hear him sing. The agony and austerity he has gone through to recover till this stage is something that we can never know – the details that one of his servants once told me were heart-wrenching.

That Maharaj has tread the comeback track not for his personal glory as do sports players, but for glorifying the Lord and for benefitting all of us makes him the undisputed comeback emperor. His comeback narrative is itself incredible enough to be etched in golden words in ISKCON history. And his comeback is just one part of a life of superhuman dedication and tireless sacrifice.

I haven’t had the fortune of getting much personal association of Maharaj, though I have received his blessings indirectly through the association of many of his illustrious disciples. The only occasion when I got his close association was during a youth festival in Kolkata when he was to give a talk on Recession, which was a burning issue the world over at that time. I had written a book on that topic and prepared a ppt, which I showed to Maharaj. He asked me to shorten the ppt as he wanted to elaborate on the slides. I removed some slides and then operated the slide show as Maharaj spoke. Using the slides as takeoff points, he drew on his multi-decade global preaching experience to brilliantly expose the falsity and futility of greed’s promises. Even more amazing for me was that he remembered three slides that I had deleted – he quoted their content and elaborated insightfully on them too. The clarity of his consciousness and the accuracy of his recollection were simply astonishing.

Whoever doubts the possibility of miracles needs to just look at His Holiness Jayapataka Maharaj to behold an undeniable living miracle.

Posted In
Articles, ISKCON
Tags
About The Author

You might also like
ArticlesISKCON
MORE
Prabhupada — the transcendentalist who embodied the best of the traditionalist, the existentialist and the utopianist
Responding to attacks on devotees in Bangladesh
How to overcome hypertension, anxiety and depression during the pandemic
While the world slept …
By using the lower case pronoun for Krishna, aren’t you minimizing his position?
“Unplanned” movie exposes the planned denial of reality surrounding abortion
6 Comments
Leave a response