Learning from the audience 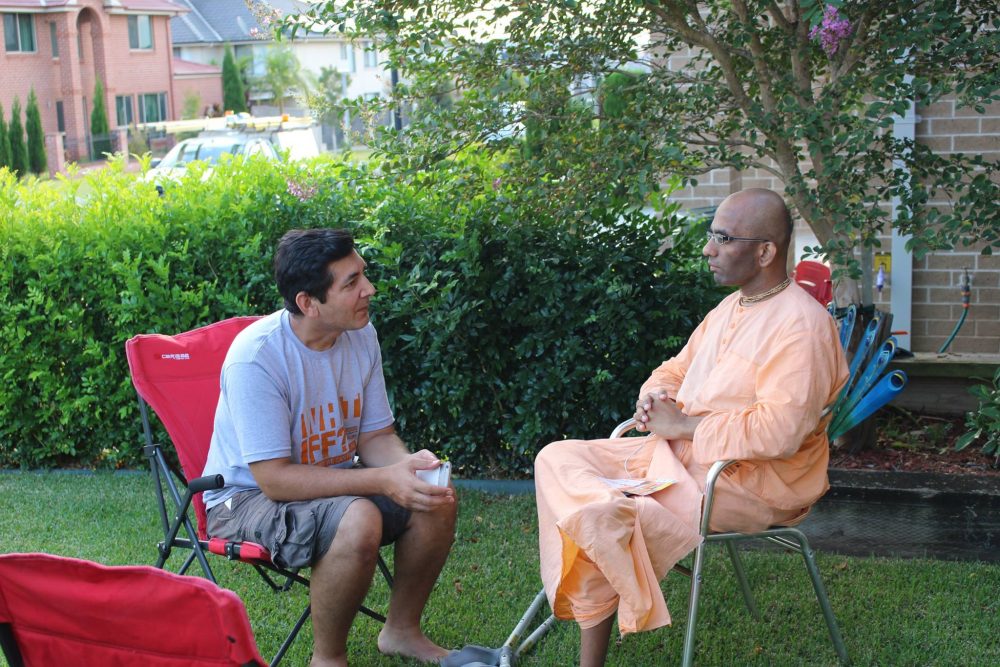 While I travel to speak on the Bhagavad-gita, I see myself primarily as a student of the Gita. And I have found that retaining such a learning mood helps me draw ideas and insights at even the unlikeliest of times. For me, learning from the audience doesn’t happen just during the class or after the class. In fact, most of this learning happens during my one-to-one meetings with people or even by overhearing casual words they speak while driving me for a program.

During my Rama-Navmi class at a temple, a small girl sitting right in front of me was busy writing something in her notebook. I couldn’t but wonder, “Did she have some urgent homework? If so, why did she have to sit in the class and sit right in front?

After the class, she came with her mother and shyly gave me a painting – it turned out that she had been drawing me! She was not old enough to fully understand philosophical classes, but still she liked to sit for classes. And as she liked to draw, she would draw the sights in the temple, including the speakers.

Seeing her devotional disposition, I was reminded of the danger of judging without understanding – something I had spoken repeatedly and what I had spoken just recently during a Rama-katha class when explaining how Vali had misunderstood Sugriva, leading to a lifelong rupture of a dearer-than-life friendship.

When she asked me, a little nervously “Do you like it?” I replied, “Yes, the painting is so good that I didn’t know that I looked so good.” As the devotees around us started laughing at the word-play in the appreciation, she hid her face in her mother’s legs.

During my first program at Carrier clinic, when I was introducing chanting to my audience, I got a burst of creative inspiration and presented it as not just mantra meditation but as spiritual affirmation. After the class, the in-charge there who had coordinated the program told me that she found most appealing the idea of chanting as an affirmation. She explained that in the West, though meditation was becoming increasingly popular, it was not yet mainstream; it was still seen as Eastern or other-worldly. But affirmation was cool. Her words verbalized my inchoate sensation about the appeal of affirmations. I thanked her for her feedback and from that class onwards, I started introducing chanting as an affirmation for spiritual harmony, which meant, “O part, return to harmony with the whole.”

Can we love someone whom we hate?

During one of my meetings, a couple who I had known to be very close to each other told me that over the last few months their relationship had become very strained and that this was hurting both of them. Talking with them helped me realize that their anger was simply a distorted expression of their affection for each other. After churning on that thought for several days, I felt inspired to speak on “Can we love someone whom we hate?” at a congregation program in Portland. I spoke of five aspects of love – as attraction, as emotion, as intention, as expectation, and as action. I could see that the topic caught the attention of the audience and we had a stimulating question-answer session, both collectively and individually. When that couple heard the recording of that talk, they wrote to me saying that it helped them better understand what had gone wrong in their relationship and how they could set it right.

Contemplating fight or flight during a ride

When a devotee was driving me on a four-hour drive to his place, his daughter, a medical student whom he had picked up from a university along the way, started talking with her father. While I was busy chanting and contemplating ideas for my articles and talks, I couldn’t but over-hear their conversation. In one of the most open father-daughter interactions I had ever seen, she told him that they both had different approaches to life. Drawing on the psychological trope of fight-or-flight, she told him that he usually moved away from conflicts whereas she confronted them head-on – both, of course, with the intent of best dealing with the situation. Hearing their discussion gave me the idea to speak on the topic of “Go beyond fight or flight to sight.” There, I presented this psychological concept in terms of the three modes of material nature and explained how we can go beyond the mode of ignorance’s prompting for flight and the mode of passion’s prompting to fight by internalizing the sight that comes from scripture, thereby functioning in the mode of goodness.