Science and Spirituality – From confrontation to reconciliation 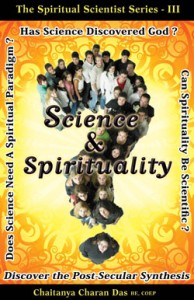 The most cringe-inducing question I faced during my entire tour was in Washington DC where, after my Sunday feast class on Reincarnation, a Latino devotee asked, “As scientists keep people away from God, can scientists be considered reincarnations of demons?”

The question reflected a series of valid points linked together in a way that leads to a massive misunderstanding. I explained that we are not meant to judge people meant on what they may or may not have done in the past, but based on what they are now. And scientists are not intrinsically against God; they look for natural explanations for natural phenomena and so don’t bring God into their explanations as God is a supernatural reality. Newton believed in God, but for explaining the falling of the apple, he looked for a natural explanation and came up with the theory of gravity. Some scientists are against God, but their anti-theism comes from their own ideological orientation – it’s not intrinsic to science. And if we look at the kind of negative experiences with religion that some of these atheists had, we won’t demonize them – if we had similar experiences, we too would probably have become atheistic. So, rather than labelling scientists negatively, if we present the Gita’s message rationally, we will better do our part of making it accessible to everyone, including scientists.

This question-answer impressed upon me the urgency of addressing the much bigger issue of science-scripture difference in an intellectually responsible way. I have been pondering this issue for many years, especially with regard to the relationship between modern cosmology and Bhagavatam cosmology. Finally, after many years of study and prayer and discussion with many learned devotees, I have arrived at a five-point approach that I feel confident to present in any forum.

While I have spoken on this overall theme at various places, I spoke on these points succinctly in a Bhagavatam class at the Bhakti Center: 5 reflections for reconciling science and scripture.