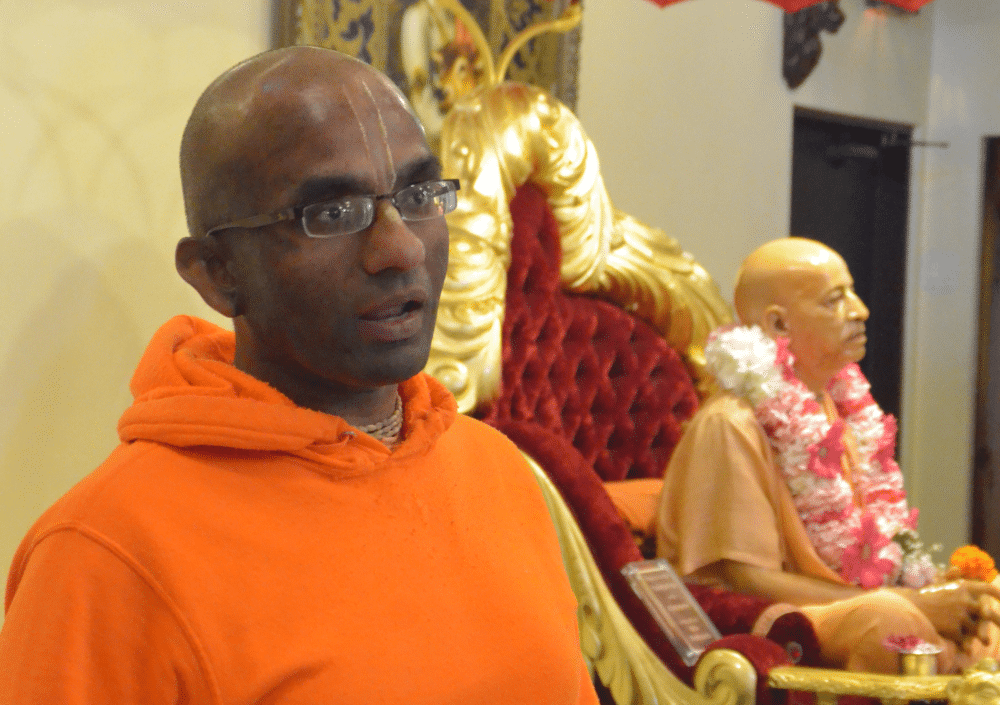 After my hotel program in Panama, a couple of trans-gender devotees talked about the discrimination they faced because of their sexual orientation and asked how they could see it spiritually. I had addressed a similar question when I was in Detroit where after the Sunday feast a Vaishnavi Prabhupada disciple had asked, “How can we help people who feel that they have been born in bodies of the wrong gender?” Rather than getting into the morality of the volatile issue, I focused on the spirituality. Nobody is truly compatible with the soul; everyone feels discontented in some or the other way with the body they have. Rather than making a campaign for or against anything at the bodily level, it’s best to focus on raising our consciousness to the spiritual level and helping others do the same. If someone has fallen in an ocean, they may feel that their part of the ocean is stormier than another part, and may want to go to that calmer part. But in the process, if they neglect the rescue rope being extended from an overhead helicopter, that would be tragic. The process of bhakti-yoga is that rescue rope; which part of the ocean we are in and which part of the ocean we are going towards is not as important as our catching the rope. Rather than making a campaign for or against any kind of bodily change, it’s better to stress spiritual change – the raising of consciousness. I concluded by telling those trans-gender devotees that they could focus on associating with devotees who understood them rather than judged them and in that association strive to grow in bhakti.

Speaking on dharma at Swaminarayan temple

During my second visit to Panama, I came to know that one of my talks had been scheduled at a Swaminarayan center where some of the organizers were receptive and some reserved. Anticipating their concern that their beliefs might be criticized, I used the strategy we use in any inter-faith meet: focus on the common purpose of raising consciousness. Accordingly, I spoke on Select emotions with intelligence focusing on how scriptural knowledge equips us to make the choices that raise our consciousness. Speaking in Hindi to an audience of almost entirely Gujarathi people, and that too in a country outside India, was unusual. And speaking at a forum that required the female audience to sit in another room felt surreal, almost like a throwback to another age.

Many temples in the US combine the Gaur Purnima celebration with the Holi celebration as they both happen on the same day. A little sprinkling of colors is added to the overall celebration that centers on Lord Chaitanya.

In Phoenix, I spoke on “Lord Chaitanya demonstrates that the heart is higher than the head” I find talks given on appearance days of the Lord challenging because the basic theme remains the same, at least in terms of the rationale for divine descent and the pastime of the descent of that particular avatara. I am not so spiritually advanced that the purity of my krishna-katha will keep the audience engaged. So, whenever I am asked to speak on festivals, I strive to come up with some fresh angle each year. This year on Gaur Purnima, I took the theme of how Lord Chaitanya defeated the topmost scholar of his times, defeating the best contemporary scholars at a prodigiously young age. Having thus attained the summit of scholarship, when he thereafter chose the path of devotion, he demonstrated by his life and choice that bhakti is not for the less intelligent, as is a common allegation. Bhakti is so inclusive as to be practicable even for the less intelligent and so profound as to be appealing even to the most intelligent.

After the class, a Prabhupada disciple told me that I hadn’t spoken anything about Lord Chaitanya being the combined manifestation of Radha-Krishna and his having come to give prema, which no other incarnation had given ever before. I replied that I had considered that point too advanced to be relevant for the largely new audience there. He disagreed, saying that we had a responsibility to make the audience advanced enough to understand it. After some contemplation, I saw the validity of his point – we had time throughout the year to speak basic points relevant to the audience; at least once a year on Lord Chaitanya’s appearance day, we could speak about his exalted mission and mood. I thanked him for his feedback and assured him that I would be more careful to speak in tune with the festival’s essence.

Actually, last year in Canberra, a Prabhupada disciple had given me the opposite feedback. He had told me that my Gaur Purnima Bhagavatam class Lord Chaitanya manifested the three internal reasons for his descent in his Ratha-yatra lila had been too advanced. That feedback might have made me subconsciously veer to the other extreme.

When I was to fly from Seattle to Boston, I got to the airport slightly late and the queue for checking in the luggage was so long that by the time we got through it, the time for boarding the flight had already passed. I had a Wednesday feast program that evening in Boston, but there was no flight to get me there in time. We re-adjusted the booking to a night flight, so that I could give class for the Boston audience via skype. To preclude any transmission problem, we decided that I could give the class in the temple which had a hi-tech facility for doing both YouTube live and Facebook live. When I gave the class, it was streamed through three channels – Skype, YouTube and Facebook. I found myself in a situation I hadn’t encountered before – speaking on a vyasasana to an almost entirely empty temple hall. I decided to keep the class short and we had a lively QA session not just with the devotees in the Boston temple hall but also several of the devotees from Seattle who too had joined online. (As it was afternoon in Seattle, most of them couldn’t come).

In Toronto, I did a radio show on “Karma and Reincarnation” where I spoke briefly and then answered questions that came live from the audience. Conducted by Ananda Gauranga P and his team, this was my first radio show and it was interesting to be on the inside of a program format that till now I had only seen as an outsider. I appreciated the innovative effort to spread bhakti wisdom through far-reaching channels and felt grateful to assist in some small way.