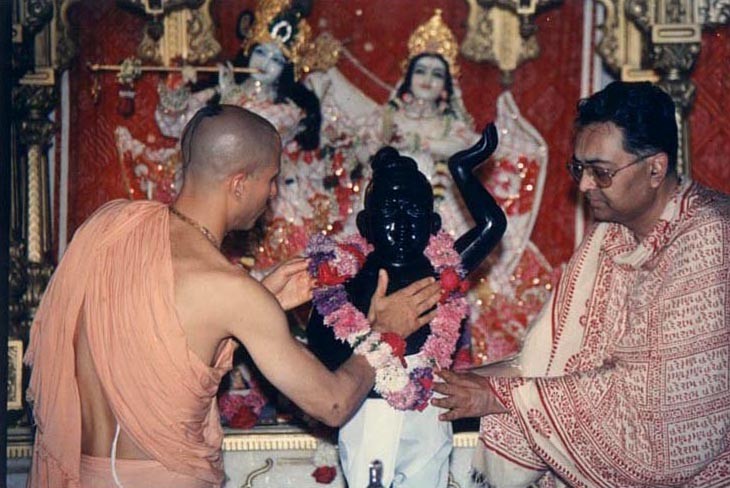 My first striking encounter with Srinathji Prabhu highlighted his extraordinary attention to specifics. About a decade ago, when I was a fledgling author, I would feel encouraged whenever anyone appreciated my writings. Once after a Pune yatra, while everyone was taking prasadam and preparing to depart, I happened to meet Srinathji Prabhu. And he spontaneously started appreciating my writings; he mentioned several articles by their titles and went into specific details of an article that had described how I came to Krishna consciousness. I was doubly astounded firstly because I was a little-known brahmachari and secondly because that story had appeared in BTG at least two years ago. And yet here he was, immediately remembering its specifics in just a chance encounter with me.

Over the years and my several encounters with Srinathji Prabhu, one image of him that has crystalized within me is that of an intellectual patron of intellectuals. He supported several of our movement’s authors, enabling them to focus on research and writing without having to worry about pecuniary considerations.

But he was not just a patron of intellectuals – he was an intellectual himself; he read widely and took intellectual responsibility for the tradition he had chosen to practice. He noticed that the version of the Hare Krishna mahamantra we chanted was different from its version chanted in the broader Hindu culture, which began with Hare Rama, not Hare Krishna. So, he embarked on an extensive research into manuscripts to support our tradition’s rendition of the mahamantra. After much searching, he finally found in a remote, little-known library the manuscript of the Kali-Santarana Upanishad that contained the mahamantra starting with Hare Krishna – and he published a book with that manuscript. His meticulous attention to detail during this manuscript research paralleled, if not superseded, that of a careful scholar.

He was a patron for not just intellectuals but also for many of our movement’s most important projects. And yet he wasn’t patronizing towards anyone – he maintained a humility that was inspiring and disarming.

His significance extends far beyond his lifetime. Over the last decade, I have been studying and contemplating ISKCON history. And I feel that Srinathji Prabhu represented the rich flowering of the bhakti tradition in modern India and particularly in ISKCON India.

He embodied the dream success chart for most Indians. He achieved extraordinary academic success, earning degrees from both England – which was the cherished educational destination for pre-Independence Indians – and from the USA, which is the cherished educational destination for post-Independence Indians. And he went on to achieve remarkable success not just as a white collar executive but also as a business magnate, pioneering several technological innovations in India in his companies.

Through all this dazzling success, he maintained his piety and bhakti, which he had acquired from his parents, both of whom were Vaishnavas – his mother from the Vallabha sampradaya and father from the Ramanuja sampradaya.

Even after having this combination of material prosperity and religious piety, it’s telling that he found spiritual fulfillment in the teachings of bhakti as expounded by Srila Prabhupada.

When Srila Prabhupada was present in his manifest form with us,, a remarkable number of wealthy and influential Indians were attracted by his purity and potency. And several of them became important supporters of our movement. But somehow after Srila Prabhupada’s departure, many of them couldn’t take the step forward from being patrons to becoming practitioners.

Srinathji Prabhu was prominent among the very few who took that step forward – and he could do so primarily because he was able to see Srila Prabhupada’s enduring presence in his dedicated disciples. He treasured the personal association of Srila Prabhupada that he had got. But he also saw that Srila Prabhupada lived on through his followers; and he committed himself to serving His Divine Grace through them and with them.

For most of us, second-generation devotees in ISKCON, who have never had the personal association of Srila Prabhupada, our ability to appreciate him depends largely on our ability to see him in his dedicated followers. In this, Srinathji Prabhu set an example for all of us.

Through him, the bhakti culture flourished within its Indian motherland. And through remembering him, I pray that bhakti may flourish in my heart too.