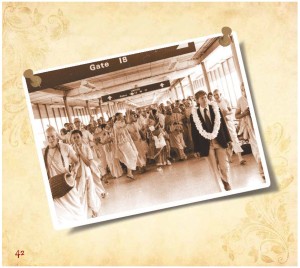 Some of the Swami’s enterprising followers went to San Francisco, attracted people there to the spiritual chant of the holy names and invited him to come there. They sent a flight ticket and thus he flew for the first time in his life – from New York to San Francisco. On disembarking, he was welcomed by an enthusiastic group of young people chanting the holy names. When asked how his flight had been, the Swami’s reply revealed his constant absorption in Krishna. He said that on noting how small the giant buildings looked from the airplane, he had contemplated how small everything would look from Krishna’s perspective.