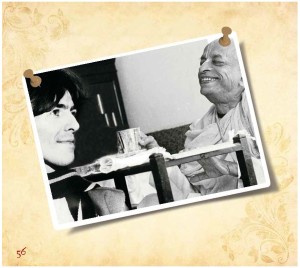 During Srila Prabhupada’s stay in London, George Harrison came to meet him on several occasions. The saint encouraged the musician to compose devotional songs with lyrics that included the holy names. Inspired by this guideline, George Harrison produced several devotional songs such as the celebrated “My Sweet Lord,” which was a composition in praise of Krishna that the Rolling Stone magazine ranked as 460th among the 500 greatest songs of all time. He also teamed with the devotees to produce albums such as the Radha Krishna Temple. The song “Hare Krishna mantra” from that album became a global bestseller.  The devotees performed it twice on BBC-TV’s Top of the Pops and in multiple concerts across Europe, thus introducing the holy names of Krishna to millions.