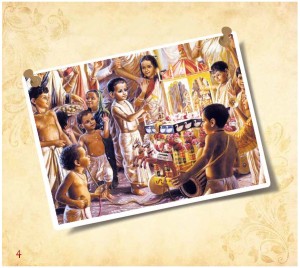 Children while playing often mimic their elders. Little Abhay played like other children, but he also had a special play: organizing a Ratha-Yatra festival on the streets in the vicinity of his house. Right from getting a cart of the right size to leading and guiding the procession while playing mridanga, he re-enacted with earnest devotion the spectacular chariot festival that annually attracts millions to Jagannatha Puri. His childhood play signified what he would be doing in future: organize Ratha-Yatra festivals all over the world.